The Return of Jupiter 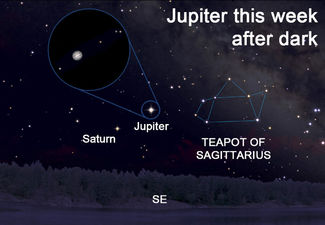 Jupiter reaches its opposition point on July 14, when it appears opposite the sun in our sky.

Summer skywatchers will soon be enjoying a couple of planetary visitors in our night sky. This week, the giant planet Jupiter returns to our early evening sky.

Jupiter reaches its opposition point on July 14, when it appears opposite the sun in our sky. In other words, as the sun sets in the northwest, Jupiter rises over the southeastern horizon and shines brilliantly in our sky all night long.

This "opposition" point also means that the planet lies closest to Earth (only 384.8 million miles) and, therefore, appears larger and brighter than at any other time along its orbit. So, Jupiter, which is always impressive to view through a small telescope anyway, will be especially impressive to view right now. In fact, it will create quite a sight for the next month or so.

Jupiter is always one of my favorites because it's one of the few celestial bodies that actually seems to do something. Here's a world that's 11 times the diameter of Earth, yet it rotates on its axis once every ten hours or so. This means that its Earth-facing side changes completely in just five hours, and, with patience, skywatchers with a small telescope can easily watch its pastel cloud bands and, sometimes, its Great Red Spot change completely in just one long evening of stargazing.

Equally amazing is knowing that Jupiter is a world composed entirely of gas; there is absolutely no surface on which to stand. Hypothetical astronauts trying to "land" on the planet would just plunge deeper and deeper into its murky atmosphere until they'd become crushed beyond recognition by its tremendous weight. Perhaps the most enjoyable part of watching this planet is using a telescope to keep up with the antics of its four largest moons. These are known as the Galilean satellites –Io, Europa, Ganymede and Callisto – because it was the Italian astronomer Galileo Galilei who discovered them and their movements some four centuries ago. At last count, Jupiter appears to have 79 moons orbiting its globe.

These moons do-si-do around the Jovian disk from night to night, occasionally vanishing behind, or slipping in front of, Jupiter, or even casting their shadows onto the giant planet's cloud tops. And sometimes, if two moons are passing each other or approaching or receding from the planet's disk, a sharp-eyed observer can see their movements in only a few minutes. Yes, the Galilean moons provide endless entertainment for the backyard astronomer.

Much of the fun of watching these moons is knowing which is which. You can identify them by visiting https://skyandtelescope.org/wp-content/plugins/observing-tools/jupiter_moons/jupiter.html, where you can type in the date and time and receive a graphic representation of their positions. To learn more about these incredible natural satellites and their amazing parent world, be sure to check out https://solarsystem.nasa.gov/planets/jupiter/in-depth/

Jupiter will remain in our evening sky throughout the summer and autumn months, but now's a great time to aim a small telescope in its direction to get a close-up look at this exciting giant planet and its exciting family of moons.

Next week, we'll take a look at the second planet to join our night sky this summer: the beautiful, ringed Saturn.