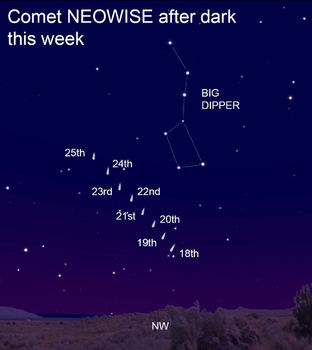 Comet NEOWISE passes through our cosmic neighborhood about every 6,800 years.

It's been quite a while since we've seen a bright comet in our skies. Many stargazers remember the show put on by Comet Hale-Bopp 23 years ago, but most folks can't recall seeing another one since.

One is now swinging past the Earth and, while it won't compare to Hale-Bopp, it has become barely visible to the unaided eye.

Comet NEOWISE, like all others, is one of billions of small icy remnants of the primordial Solar system that tumble silently through space. Occasionally, one of these cosmic nomads drifts inward toward the sun's heat, and its ices disintegrate into a cloud of gas and dust around its nucleus (the "coma"). Sunlight and the Solar wind act as a fan and blow this material outward to create one or two tails that always point away from our star.

With a diameter of about 3 miles, the icy nucleus of NEOWISE is fairly large but much too small to be seen with the eye or even a powerful telescope. Its long tail, however, can be seen as it stretches away from the direction of the sun (below the horizon after dark, of course).

As compact as a comet's tail may appear to us from Earth, its material is actually distributed over tens of millions of miles; in fact, to achieve the density of the air we breathe, a comet's entire tail would need to be compressed to fit into the size of an average suitcase. In other words, a comet's tail is the closest thing to nothing that's still something!

Comet NEOWISE is a type of comet known as a periodic comet; it passes through our cosmic neighborhood about every 6,800 years. During this visit, it swung close to the sun in early July and brightened enough to become barely visible to the unaided eye during predawn hours.

Now it's crossing over into the evening sky, and on July 22, it will reach its nearest approach to the Earth of 64.3 million miles.

Just how bright NEOWISE will appear as it passes us this week is anyone's guess. Will it be bright enough to see with the unaided eye, or will it fade as it recedes once again into the depths of space? No one can say for sure. Comets are notoriously fickle. As noted, comet-hunter David Levy likes to say: "Comets are like cats. They both have tails and they both do what they want." Their unpredictable and ghostly nature has led people over the ages – even some today – to interpret them as cosmic harbingers of doom.

Nevertheless, it may be possible to spot this interplanetary nomad in the evening sky this week – if you've got very dark skies far from the lights of large cities. Over the next week, NEOWISE will appear in the northwestern sky shortly after dark, just below the Big Dipper.

Be sure to check out the accompanying illustration and grab binoculars to locate and enjoy the amazing interplanetary iceball this week after dusk!