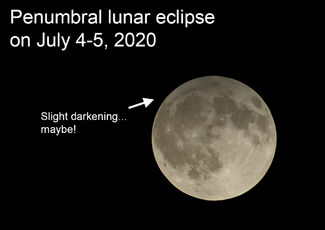 If you're looking for a celestial challenge this week, you're in luck.

On the night of Saturday, July 4, you might want to pay close attention to the full moon. If you do, you may be treated to a celestial phenomenon that few, if any, stargazers will even notice: a penumbral eclipse of the moon.

Depending on where you live, you may see the northern edge of the moon appear the slightest bit darker that night. The maximum eclipse -- and our best chance of noticing anything at all -- occurs when the moon enters deepest into the penumbral shadow not long after moonrise on the West Coast of North America, and during the late evening on the East Coast.

Keep in mind that you'll be looking only at a full moon, so you will not need a filter to protect your vision. You may, however, want to aim binoculars in the moon's direction for a closer view.

This will not be what one might think of as a "typical" lunar eclipse, so regardless of where you live, only those who know what is happening will have much chance of noticing anything at all. The reason is that the Earth (which is illuminated by the sun) casts two shadows into space: a dark inner shadow (the umbra) and a light outer shadow (the penumbra).

You can demonstrate this for yourself by finding a bright lightbulb and casting the shadow of your hand onto a wall. Look carefully, and you'll see that your hand also casts two shadows. The darkest part of the shadow is what we call the "umbra," but since the light source is not a point, the edges of your hand's umbra tend to blur a little, producing a faint outer shadow we know as a "penumbra."

The sun, like the lightbulb, is also an extended light source, subtending about one-half of 1 degree in the sky, so when the Earth's shadow is cast into space, it, too, appears lighter and fuzzier along the edges. And it's this outer penumbral shadow that the moon will skim through on July 4.

If you miss this eclipse -- and many of us may because it will be quite subtle -- you may be able to see a slightly darker penumbral lunar eclipse in November, when the moon will dive a bit more deeply into the Earth's penumbral shadow.

The next really deep umbral lunar eclipses visible to parts of North America will occur in May (a total lunar eclipse) and in November 2021 (a partial eclipse, but very nearly total). These will both be quite spectacular to see.

In the meantime, don't miss the penumbral eclipse on Saturday night; at the very least, you'll get to enjoy a beautiful full moon!