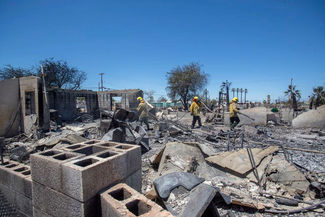 Imperial County firefighters puts out hot spots in a home after the brush fire in Niland that destroyed 37 homes on June 28.

Residents were left to pick up the pieces, after a massive brush fire that killed one person and destroyed 37 homes, torched its way through Niland, just east of the Salton Sea, on June 28.

The fire started near Highway 111 and 4th Street, and quickly became a three-alarm fire a little after 6 p.m., according to the Imperial County Fire Department. The high winds fueled the fire, which quickly carried past the highway onto nearby structures.

Personnel from Imperial County Sheriff's Department, California Highway Patrol, U.S. Border Patrol and local law enforcement aided in evacuations. Firefighters from all units in Imperial County, and some from Yuma and San Diego, were dispatched to assist the fire overnight. A state of emergency was declared by the County Board of Supervisors, and established a Local Assistance Center.

Fire crews managed to control the fire at around 2 a.m., and by 8 a.m. the following day the fire was contained. Crews remained at the scene to monitor and put out hot spots.

The town was evacuated and residents moved to temporary shelters. The American Red Cross was called in and assisted at least 130 displaced people in hotels, fire department said. Many evacuees were sent to Calipatria High School for temporary shelter.

About 570 Imperial Irrigation District customers in the area lost electricity June 28 and power was restored to 414 of them by 11:30 a.m.

The cause of the fire is still under investigation.