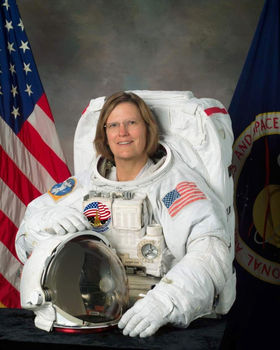 The International Space Station was engaged with experiments and welcoming new arrivals on June 9. It was steadily working on its 15+ orbits, circling faster than 17,000 miles per hour then suddenly the land line rang. It was calmly answered, who calls the space station?

"Greetings Earthling." After all, 8 billion people were a mere 250 miles away. "It's Kathy." "Kathy who?" "Sullivan. Dr. Kathy Sullivan?" "Please remain weightless." The theme music to the series Dallas plays briefly. "Kathy! Haven't seen you since the Hubble years! What's weightless? Ha!" "You wouldn't believe what I just did." "Let me guess, the first?"

Private money continues to weigh against the boundaries of commercial exploration, this time towards the Earth's center, not away from it. Mysterious investor Victor L. Vescovo, 57, and former NASA astronaut, Dr. Kathy Sullivan, 67, both plunge bravely, seven miles, towards the deepest crevice on Earth, Challenger Deep. Also a U.S. Monument, this abyss is a seabed recess in the southern Mariana Islands about 200 miles southwest of Guam. Discovered by the H.M.S. Challenger, a British ship that sailed the globe from 1872 to 1876, Challenger Deep has measured 35,827 feet deep.

Dr. Kathy Sullivan's resume just garnered the first person to spacewalk as well as descend to the deepest place on Earth, and for the cherry, the 8th person to reach Challenger Deep. Upon surfacing, she immediately shared her world record status with her friends on the ISS so they were "in the know". Expedition leader and subcontracted EYOS Expeditions CEO/Founder Rob McCallum said it was amazing to set up the call between the two "spacecrafts." It's lonely out in space and Elton John and Kathy Sullivan know. Unlike Elton, Kathy has a 15-year career with NASA and is now a hired gun, sorry Elton.

"As a hybrid oceanographer and astronaut this was an extraordinary day, a once in a lifetime day, seeing the moonscape of the Challenger Deep and then comparing notes with my colleagues on the ISS about our remarkable reusable inner-space outer-spacecraft," Dr. Sullivan said in a statement released by EYOS Expeditions.

In 1978, Kathy Sullivan was one of six women who made a total of 35 people selected for the NASA Astronaut Corps and became the first American female spacewalker. She was a Crewmember of three space-shuttle launches, including the mission that deployed the legendary Hubble Space Telescope, the first non-terrestrial telescope in the world. Her vivid book, Handprints on the Hubble, actively positions Sullivan as witness to the space industry's cyclical expansion and retraction.

Her solid operational strengths under pressure lead her to hold the reins for the enigmatic investor. Who is Victor Vescovo? He holds a master's from MIT, a double major from Stanford and an MBA from Harvard. Military stops proved digging up information on Victor to be a task, unveiling only a handful of meaningless facts. Victor's father worked in commercial real estate, he was reported to compete with Trammell Crow and date Dallas Cowboy cheerleaders.

"A joke among my friends is that my dad stayed out later than I did." Victor stated.

Victor retreated into the protective folds of the military while he eagerly undertook extreme challenges to force life changes. By 2019, Vescovo completed three missions to Challenger Deep.

This venture was part of a $48 million attempt to sink to the deepest point in five oceans. Vescovo and the former astronaut descended via deep seacraft, the Limiting Factor, and lay course for another record breaking journey.

The sub's 3.5-inch-thick titanium-alloy hull is designed to withstand those pressures, and it has survived five previous missions to Challenger Deep, it's the only reusable submersible ever created. In 2012, James Cameron, filmmaker and sea explorer, surveyed the bottom of Challenger Deep and disputed Vescovo's claim to history's deepest dive.

"What he's done is quite remarkable. Where I take exception is his saying he went deeper." James Cameron told The New York Times.

The two millionaires' dispute was publicized after Cameron emailed The New York Times with his grievance titled "Request to Speak." In 1995, Cameron, well known for, well everything, explored the bottom of the North Atlantic seabed to survey the literally, "in the corner and rusting" Titanic. He totaled 33 expeditions and made an unbelievable go at it by using the footage for his upcoming film.

After the 1997 release of Titanic, the New York Times' William J. Broad wrote that Cameron's dive signaled "the rising importance of entrepreneurs in the global race to advance science and technology."

Oceanographers say problems arise when the sonic impulses sent to the bottom from a surface ship, are corrupted through layers of differing composition and temperature within the sea before bouncing off the bottom then back to the top. Vescovo stated that newer technology lent more accurate readings of the ocean's true depth. He verbalized to Business Insider that he'd be returning to Challenger Deep to resolve their disagreement once and for all. Despite the bad blood, Cameron's technical innovations were praised by Vescovo, who spoke from Monaco, while visiting Prince Albert, a patron of ocean studies and exploration.

"The bottom of Challenger Deep is flat and featureless." observed Cameron. "I question that result," he told Wired. "I also question why nobody else has questioned that result." Cameron also told Popular Science, "At the risk of sounding like sour grapes, it's important for the public to know that the one deepest point in our world's oceans is a flat, featureless plain."

Enough on the warring titans and back to Kathy Sullivan's mind blowing experiences with adventure and Elton John. Kathy describes her simulations in training as "drinking from a firehose," while waiting in a long line for crews to have a chance on a mission. This, she describes, created feelings that oscillated between "longing desperately and not daring to hop." After a patient, but agonizing wait, then an adrenaline exhausting, hormone exploding mission, only to return to the back of the long crew line.

In 1988, she left, post Challenger Disaster, the shrinking program for an oceanography position. Oceanography had been her original academic pursuit before family members coaxed her into applying for the space program. Getting back to Elton, in 1988 he released Reg Strikes Back, which is my favorite album (next to Live in Australia) but proved to be a flop, only making it to #20 on the UK charts. A measurable step back for both of them, but similarly, they both turn to rise as Kathy, thanks to Edwin Hubble, re enters the space program and Elton steams ahead towards Wimbley and George Micheal. By 1990, they were both killing it with Sir Elton's Lion King soundtrack and Kathy STS-31, the Hubble Space Mission. Two rockets passing in the night, two different missions but both reaching the stars.

"Big Congratulations to her!" Vescovo tweeted regarding his deepsea companion's unique rank after their successful mission.

Much different from SpaceX, the Limiting Factor deep sea shuttle was launched by EYOS. What does that mean?

Expeditions, Yacht Charters, Operations, SeaXplorer with Rob McCallum at the helm, this menu of "off the charts experiences" is enough to stir your blood by just reading the list. McCallum's YOLO brand catches the eye of eccentrics like Vescovo or becomes essential for official recovery missions like Air France 477. Much like SpaceX, EYOS serves a similar, ultra exclusive experience with little Earthly limits. These private adventure companies are making their way by tapping the commercial exploration market and finding an audience, along with elite professionals waiting on the sidelines.

"Two groups of humans using cutting edge technology to explore the outer edges of our world," McCallum said. "It highlighted the vast span of human endeavor while at the same time linking us close together as fellow explorers."