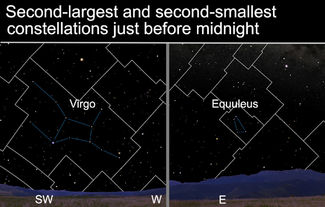 Though we often think of constellations as celestial pictures, they are actually defined as areas that divide the sky.

Back in the days of burlesque, there was a skit in which the comic was given a banana after delivering the punch line to a very funny joke. This may be the origin of the term "top banana" – a reference to someone reaching the top of his or her business.

The term "second banana" may have also originated from this same skit, but second bananas are seldom remembered. For example, who knows the second person to reach the South Pole? Or the second to build a lightbulb? Or the second to walk on the moon? OK, if you're reading these words, you probably know that one, but you get my point.

Second place, unfortunately, is often forgotten. And so it is with stars and constellations.

Though we often think of constellations as celestial pictures, they are instead defined as areas that divide the sky, much as states divide the U.S. And, just like states, they all have different sizes and shapes, and they all fit together like a celestial jigsaw puzzle. Every point in the U.S., for example, is part of a state (except for the District of Columbia), and every point in the sky is part of a constellation.

In the southwestern sky late at night this week, we can find the second largest of all constellations: Virgo, the maiden. It encompasses about 3% of the entire celestial sphere and is marked by the bright white star Spica.

Throughout history, Virgo seems to have represented just about every major female deity. In Sumerian-Chaldean civilizations, she was known as Ishtar, the queen of the stars. To the ancient Romans, she was Ceres, the goddess of growth and harvest. In ancient Egypt, the stars we know as Virgo may have been Isis, the principal mother goddess of ancient Egypt who helped form the Milky Way.

On the opposite side of the sky (also around 11:30 p.m. this week) lies the second-smallest of all constellations: Equuleus, the little horse. Equuleus is thought to be the swift brother of Pegasus, the winged horse, though we don't know much about this star grouping.

You will need a very dark sky to see Equuleus; most of its stars are so faint we cannot easily spot them, except in the darkest and the most rural areas.

So tiny and "unknown" is Equuleus that Robert Burnham Jr., in his classic three-volume, 2,138-page tome titled "Burnham's Celestial Handbook," devotes to it just three pages, compared with 68 for the constellation of Virgo.

So which are the largest and smallest of all constellations? The top banana in each category is Hydra, the water snake -- barely three-fourths of 1% larger than Virgo – and Crux, the Southern Cross (not visible from most of the U.S.) –about 5.5% smaller than Equuleus.