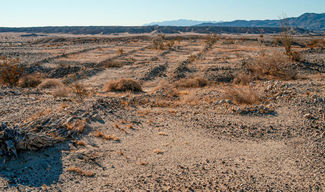 Standing in the Great Alone of the Carrizo Badlands I noticed a large swath of barren desert before me had been somehow altered by the hands of man.

Broad lines stretching off into the distance had been carved across the desert in an obvious pattern. Not easily recognized from ground level, I first spotted the markings while looking down from a nearby mudhill.

Had I discovered some ancient geoglyphs etched into the parched sand by unknown ancients? Maybe early travelers left the markings while seasonally foraging along the shoreline of what was once Lake Cahuilla?

What I had actually stumbled upon was unfortunately much more recent. Closer examination revealed a north-south line obviously made by earth movers. It appeared that five bulldozers, each with 11-foot blades had moved across the desert side-by-side, creating a 55-foot wide mark extending for several miles.

In some places the lines were quite obvious, but washouts and flooding had dimmed the marks in other areas.

It was a boundary marker of some kind.

What the lines mark are the outer safety zone of what was once the Carrizo Impact Area.

While the battles of World War II never scorched the ground of mainland America, the footprint of that era is forever etched in the sands of Anza-Borrego Desert State Park.

During World War II, the military took control of 28,000 acres of park land straddling Carrizo Creek for use as a training area.

Until 1959, the area was used for training that included aerial gunnery practice. Apparently, the lines were scraped across the desert to provide pilots with landmarks indicating where they could safely operate.

I have not been able to determine exactly when the lines were created, but for three-quarters of a century or so they have weathered the harsh desert environment and remain still visible today. It's at least a testament to the fragility of the arid desert and how long it takes for recovery, if ever, after the natural environment is disturbed.

From satellite images, the lines are still easily spotted in areas where darker volcanic soil was scraped bare.

Visitors to the area can see the lines on the eastern edge of the Impact Area, running south from Carrizo Creek, but the area beyond that to the west remains closed to the public, and for good reason. It's not a safe place.

There are also lines along the western boundary, but they are not accessible by vehicle and very faint and hard to see.

When the military returned the Carrizo Impact Area to state parks in 1959, they removed much of the surface material, but live, 1,000 bombs still occasionally show up as flash floods and erosion exposes deeply buried objects.

There is hope that someday this fascinating area of the Carrizo Badlands may once again be safely returned to public use.

Until that time, however, the old bombing range is closed and well-marked with caution signs. Entering the area illegally can result in citations resulting in hefty fines of several thousand dollars.