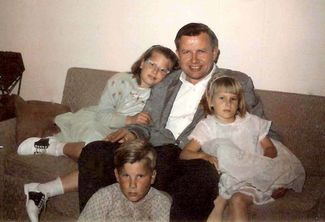 Robert "Bob" Arvid Johnson was born in 1920 during the Spanish flu pandemic in Ironwood, Michigan. He spent most of his life in California.

He passed away April 23, 2020 in Maumelle, Arkansas during our current, similar pandemic.

Bob, a WWII veteran, grew up in the Great Depression, and due to financial hardships, he worked hard to help his family. After graduating from high school in 1937, he looked high and low for a job without success. He was playing baseball with his neighbor friends on the street when he was offered a job by a contractor, who was evidently looking for a strong kid, and Bob was just that.

He started his career doing a large variety of jobs for that contractor. His first job was to help drive pilings for the still-standing bridge on Hwy 79 at Temecula Creek. Bob learned to toss and catch hot rivets on a 10 story building in Los Angeles, work on boilers, and other kinds of manual labor. Bob was injured and briefly paralyzed when a pile driver hammer exploded the pile head during the construction of an aircraft hanger on San Clemente Island in 1939.

He decided to enter a safer field at this time and attended an airplane drafting class. His teacher became the president of Interstate Aircraft, and so Bob began working at Interstate as an apprentice. His first assignment was to help draw the initial plans for a new aircraft which became the Interstate Cadet, an airplane that is still in use by bush pilots in Alaska. Bob then joined Douglas as a tracer, but soon was promoted to illustrator as he was a talented artist. He did both illustrating and writing for the maintenance/operator manual for the secret XB-19 project. The XB-19 was the largest airplane in the world when the prototype was completed in 1943, but was already obsolete.

Bob then enlisted in the Navy and joined the SeaBees. He was involved with testing and demonstrating new weapons to be used in the D-Day invasion, before heading to the Pacific Theatre. After a few months on Okinawa, after the SeaBees had established a base on that island, he was relieved that the planned invasion of Japan was cancelled due to the A-bombs. As his boot camp training entitled him to wear the shoulder patch of the 1st Marines, he was preparing to join with two million Allied soldiers in what could have been the largest amphibious invasion ever with Operation Olympic. He was discharged in 1946, and after getting a surveying job with Los Angeles County, married Ruth van Leersum (1928 – 2007) in 1947. The couple built a house and raised three children.

Bob became a civil engineer for the county after going to night school and completing his BS in Civil Engineering at USC. He specialized in designing and implementing water systems as well as creating entire new water districts, mostly in desert communities.

The couple split up shortly after his graduation in 1960, as Ruth concentrated on her career, starting multiple companies in multiple states, including wildcatting oil wells in Texas and land development in Borrego Springs. Bob and Ruth's children all attended Borrego Springs High School from 1968 – 1971.

Bob married Helena Houben (1924 – 2009) in 1964. Bob and Helena spent their spare time doing home improvements while Bob continued working for the county. After working there for over 30 years, Bob retired, but occupied his time with constructive activities. He got rid of his TV and Bob and Helena became avid readers, reading several books each week. They became avid hikers, as well, averaging about 50 miles/week for the next 30 years even though Bob, the sole survivor in a head-on collision in 1961, had broken all his toes and had foot problems the rest of his life.

The couple spent a lot of time and effort improving their hillside home, hauling about one million pounds of material that could cover a football field to build artistic stone-covered steel reinforced concrete terraces needed to prevent erosion and house the many trees and other plants on the property – perhaps the largest and sturdiest piece of art done by one couple.

Bob & Helena took a few weeks each year to be world travelers. However, when Helena passed away, he moved in and lived for the next 11 years with his youngest daughter Elsa, also a civil engineer.

Bob was driven to "be all he could be" and left quite a mark in this world – not only with his physical monuments which were built to last long after he was gone, but also by inspiring others to "be all they could be" by inspiring with his achievements and listening to people's problems and offering advice that might help – he was notorious for giving long dissertations to answer any question.

He had a full life filled with many adventures that would fill volumes, but too many to mention here. He was always thinking of engineering solutions to the world's problems and was a loving and supportive parent to all his children He has also helped countless people by giving them access to water.