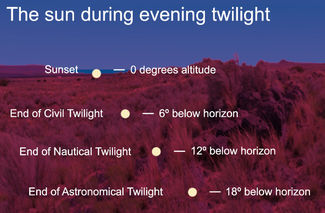 "Sunset" and "twilight" have more complex definitions than you might expect.

Sometimes, we astronomers toss around terms that we consider to be "obvious" – and to us, they are – but people who hear or read our words often wonder just what the heck we're talking about.

One example is when we speak of such objects as stars and clusters and galaxies, terms that are confusing to the public without proper perspectives on the cosmos. Another example is our use of huge numbers. It's not uncommon for us to use the word "only" to preface such quantities as millions, billions or trillions. The only people who do that are astronomers and politicians, and neither can truly grasp these on a gut level.

But, more than all other concepts, perhaps the simplest to spark questions are those of sunset and twilight. So let's start with "sunset." Just what exactly does that mean? I know it seems like a ridiculous question; everyone knows what a sunset is. But you might be surprised to learn that the words "sunset" (and "sunrise") can be defined in a variety of ways.

Those at the U.S. Naval Observatory and Geoscience Australia who are in charge of calculating such celestial matters define "sunset" and "sunrise" as the time when the upper edge of the sun's disk lies on the unobstructed horizon. An exact time for this is tough to determine because it depends on atmospheric conditions, your elevation, the terrain over which you look and more.

And what about "twilight"? What exactly does that mean? This refers to the period between sunset and darkness (or darkness and sunrise) where sky brightness decreases (or increases); some outdoor activities can continue without artificial lighting, but only for so long. Naturally, several practical definitions have evolved over the years.

"Nautical twilight" is defined to begin in the morning – and to end in the evening – when the center of the sun lies 12 degrees below the horizon. At the beginning or end of nautical twilight, under good atmospheric conditions and in the absence of other illumination, general outlines of ground objects may be distinguishable, but detailed outdoor operations are not possible. The horizon – especially at sea – is indistinct, hence the term "nautical" twilight.

In Earth's mid-northern latitudes, each of these periods lasts roughly between 20 and 30 minutes, but this varies throughout the year. For more definitions on these and other astronomically important terms, visit this website https://ga.gov.au/scientific-topics/astronomical/astronomical-definitions.