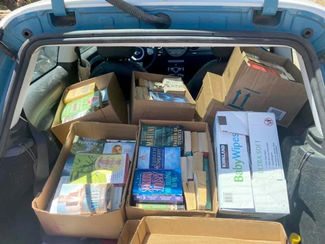 There has been a collective effort as of late in Borrego to send packages to soldiers abroad. In fact, so many community members participated in donating goods and funds to sending care packages overseas that it is impossible to name them all. Diana Fox, co-owner of The Chief, told the Sun that donations had been dropped off at the Bargain Barn, The Chief, at the American Legion Post 853, and some were dropped off with Lori Rowe.

Fox spearheaded fundraising by taking advantage of the fact that most people these days are staying at home and spending extra hours online due to the pandemic. She made posts on social media letting people know about the plan, and asked that the community donate. The community did not let her down. By the time you read this article, well over 50 boxes will have been shipped. About 10 boxes a week are being shipped, and they estimate the boxes will continue to be shipped until the middle of June.

Fox learned that some of the troops were experiencing skin irritations because of harsh weather conditions, and decided to make and donate a batch of soap and lotion made for sensitive skin.

When members of the military leave for deployments, generally they can bring nothing more than a duffel bag. That doesn't leave much room for personal belongings and items of comfort; receiving packages can mean a lot.

Among the items that are being shipped include puzzles, books, movies on flash drives, candy, gum, ramen noodle packages, and socks. There's fudge from the Fudge Factory, the Legion and the Chamber have donated T-shirts, and Rowe and her husband have donated most of the funds used for shipment costs.

There are two separate locations to which the boxes are shipped, and once received, the donations are dispersed within their groups.

Denise Donohue, who works at the Borrego Springs post office, says she got involved because she wanted to do something good for the community. Each shipment costs about $200. Since the pandemic has been in full swing, there hasn't been as many Pacific Crest Trail hikers, which has affected some of the smaller post offices in surrounding small towns like Warner Springs and Santa Ysabel. It was Donohue's idea to spread the shipments between the post offices so that each office would receive some of the shipment revenue.

For the troops overseas, these packages can't come soon enough!