Message to the Stars 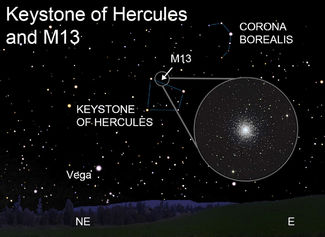 On November 16, 1974, astronomers sent a signal in the direction of the constellation Hercules.

A couple of weeks ago, I told you about the constellation Hercules and referred briefly to one of the "faint fuzzies" we can see within. Today, we'll take a closer look at that amazing celestial gem.

It was on November 16, 1974, that astronomers sent skyward a cryptic three-minute radio signal from the newly dedicated 1,000-foot-diameter radio telescope in Arecibo, Puerto Rico. It carried into the heavens the story of our world, our species and our understanding of the cosmos.

The signal was beamed in the direction of the constellation Hercules, toward a giant globular star cluster known by the less-than-poetic name of M13. They chose this cluster because among its hundreds of thousands of stars might exist at least some planets where a technologically advanced civilization might exist.

Today, however – some four and a half decades later – no one is sitting around awaiting a response, for, you see, even traveling at the remarkable speed of light (186,282 miles per second), the radio signal has journeyed little more than two-thousandths of the way to its destination. If someone or something should receive and decipher it, a reply would take another 220 centuries to reach us.

Not a particularly lively conversation, but that's OK. No one ever expected a reply. The signal was intended only as a message in a bottle, tossed by the human race to the cosmic sea. It said, in essence, "We are here." And while we may never know its fate, this message might one day let other beings curious about their own uniqueness know that they are not alone.

It's all a pretty remarkable concept, if you ask me. And equally remarkable is that we can see this very star cluster with our own eyes on any clear, dark night – if we know just where to look.

During early June, gaze midway up in the northeast after dark to find the "Keystone" of Hercules, about midway between the bright star Vega and the tiny arc of stars known as Corona Borealis.

From a dark-sky site with no moonlight, identify the keystone, and look about one-third of the way between the northwesternmost and the southwesternmost stars for a faint, fuzzy patch of light. You may not see it at first, so try a trick used frequently by astronomers. Instead of staring directly at this spot, look slightly off to its side. When not looking directly at it, you should see its hazy light more easily. If you can't spot it with your eyes alone, aim binoculars in its direction, and you'll have little trouble picking it up.

This seemingly insignificant smudge is one of 100 or so globular star clusters known throughout our Milky Way Galaxy. Each contains hundreds of thousands of ancient stars bound together by gravitation, the same force that holds us to the Earth.

Though M13 is barely visible to the unaided eye on a clear, dark night, aim a small telescope toward it and you'll be stunned by the thousands of stars you can see within its spherical form. You will surely exclaim, "It's full of stars!"