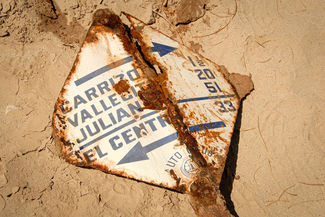 The weathered piece of lumber sticking out of the sand in a far-from-anywhere stretch of Carrizo Creek caught my eye.

Stopping my truck, I walked over to see what it could be and found the piece of wood was bolted to a buried metal post.

I was really curious now, and began to dig sand away, slowing exposing what turned out to be a diamond-shaped Auto Club directional sign that was perhaps 100 years old.

I was standing in the path of the Southern Emigrant Trail, a travel route that has been used by prehistoric nomads, early explorers, the Mormon Battalion in 1846, and the historic Butterfield Overland Stage.

Until the construction of what is now Interstate 8, this was the primary route for travelers coming to or going from Southern California.

Long before vehicle navigation systems or maps, these cryptic signs were the only clue offered to travelers following the lonely, dusty ruts through a vast wilderness territory.

Someone early in the 20th Century had dug a hole in the sand and placed this now-weathered sign that was no doubt forgotten and left to the elements when better highway routes were developed.

Perhaps a flash flood or high winds had toppled the sign, and the sands of time slowly began to bury it.

As I scraped dirt away the rusty face of the faded blue and white marker came to life, offering directions to places that no longer exist.

Carrizo was marked as 1.5 miles west. Could this be the old Carrizo Stage Station site? Only tiny vestiges of the adobe walls are still visible today.

The only arrow pointing east showed El Centro, then a wilderness outpost 33 miles away.

When was this sign placed and how many weary travelers have passed by, thankful to know that they were moving in the right direction and that civilized outposts were not too far distant?

The early days of motor travel were adventure enough, even without good signs. Roads were mostly unpaved; vehicles were much less dependable, and help was a long way away. What signs there were may have been inaccurate, or not dependable.

Soon, this effort resulted in a coordinated program that produced uniform signs placed throughout California and also copied by other states. Perhaps that sign had been placed as early as 1906.

In the great silence of the Carrizo Corridor I could close my eyes, let my mind wander and almost hear the distinctive "putt putt" of the four cylinders of a Model T as it chugged through the hot desert loaded with family belongings as Americans moved west.

Perhaps these weary travelers paused briefly to read the sign and smiled knowing that water, new faces and some wilderness comfort was just another mile or so down the road.

Back to reality. What was I going to do with the discovery?

The sign was mounted on a 12-foot pole that was very heavy. After photographing this historic treasure, I carefully recorded the GPS location, covered it with dirt and notified Anza-Borrego Desert State Park rangers.

With the help of California Overland Tours and one of their large trucks, park rangers were able to recover this bit of history and it is now safely located in the state park historical collection.

By the way, that piece of wood that caught my eye turned out to be a rudder of sorts. It was bolted to bottom of the post to keep it from turning in the sand.

One of the very special things about parks, especially large, wilderness parks like Anza-Borrego, is the preservation of landscapes.

How incredibly special it is to stand in a quiet place, gaze about and not see any modern footprint of man. To enjoy a landscape view that is the same as the view seen by the prehistoric travelers, early explorers or a family in 1910 traveling in their Model T to a new life in California.

I am thankful for our state parks.