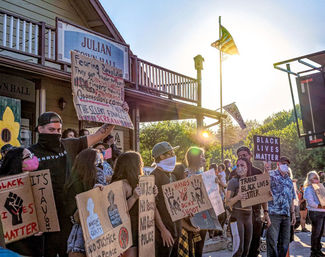 With so many protests and gatherings being held throughout the country, a group of Julian residents felt it was necessary to show their support as well. Around 6 p.m. June 4, people lined the sidewalks along Main Street with signs supporting the Black Lives Matter movement. Encouraging each other from both sides of the street, a few in the group took turns speaking out on a trailer used as a stage. About 100 people showed up to voice their concerns over the recent events, discuss racism and the need for change. Many people drove through town honking their horns to show their support, as well.

The protests follow the death of George Floyd at the hands of Derek Chauvin, the former Minneapolis police officer charged with second-degree murder. A video circulated over social media of the officer kneeling on Floyd's neck, while he continuously can be heard saying, "I can't breathe." He has been in jail since his arrest May 29. Floyd's death has sparked a nationwide debate over racism, along with police department defunding.

Like many others around the world, the gathering in Julian was very peaceful.

For a brief moment in the evening, however, two men joined the protest to voice their opinions and a bit of an uncomfortable exchange ensued. Fortunately, the group as a whole was accepting of their need to speak and share their frustrations.

The local members of the San Diego County Sheriff's Department arrived on the scene to make sure that the exchange remained peaceful. Tensions quickly subsided and the two men left the event without incident.

During the gathering, music played, people sang, danced and generally enjoyed the opportunity to get together for a cause. The camaraderie and positivity that was shown that evening was a wonderful testament to the Julian community.

Everyone around the world has marched in solidarity to the long standing issue, as many, including politicians, celebrities, and athletes unite to condemn the killing of George Floyd, and so many more.