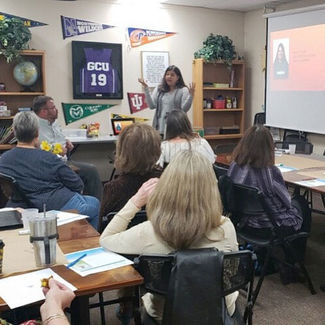 In 1998, the Julian Union School District was awarded Healthy Cities and Communities Planning and Healthy Cities and Communities Implementation grants to assist the community. A small group of parents, staff and community partners met monthly to develop a plan to better serve the needs of Julian. As a result of their discussions and resident surveys, services focused on health care access, family support, academic assistance and more. The resulting group became Julian Healthy Start.

During the next two years, Julian Healthy Start received a number of grants that allowed them to expand their services to include mental health services and a nutrition program for the Julian Union School District students and community seniors. The Julian Backcountry Collaborative was formed to bring a variety of groups together with the goal of promoting the well-being of the Julian community.

After the Cedar Fire in 2003, the group, which was named Julian Pathways at the time, and the Backcountry Collaborative provided multiple resources to the 104 students who lost their homes. The school district received the After-School Education and Safety (ASES) grant which allowed Julian Pathways to operate Club Timberwolf at the junior high campus.

Over the next few years, Julian Pathways received a variety of grants to support programs that benefited the school district and the Julian community.

From health support and drug free programs to school transportation and after school activities, the group made a point to be heavily involved with the Julian Union School District and its families. The group's staff also grew to include a Behavior Support Specialist, a Resource Specialist, a Garden Educator and a Character Education Coordinator. In 2016, Julian Pathways became an incorporated nonprofit organization to allow for additional grant and donation opportunities.

The goal of the organization was to ensure that each child received the physical, emotional, and intellectual support he or she needs (in school, at home, or in the community) to learn well.

With funding fluctuating year to year, programs have come and gone however, a few remain and more have been created. The before and after school programs thrive, social services have increased and more counseling opportunities are available due to a licensed marriage and family therapist hired by the organization. Julian Pathways, Inc. has received a number of awards to include the Substance Abuse and Mental Health Services Administrative Award, Golden Bell award, Early Mental Health Initiative PIP awards and multiple proclamations from the San Diego County Board of Supervisors.

Due to the current health crisis and the school closures, the leaders within Julian Pathways, Inc. began to quickly adjust their focus to include more of the Julian community in its services.

With food insecurity at its highest and so many in the community in need, it became apparent that the organization once again, needed to rise to the challenge of providing support.

Already armed with connections to organizations such as Feeding San Diego and the San Diego Food Bank, the nonprofit stepped in to provide regular food distributions to three different locations in the rural backcountry. Pathways, as it is affectionately called, continues to work very closely with the Julian Union School District and the students there are their top priority.

However, those in the organization felt that it was necessary to expand their services to include the community as a whole. In such a small, rural community coming together to help each other is a necessity.

Pathways' Executive Director, Hilary Ward, hopes that by expanding its services and resources to encompass the Julian community, those living here on the mountain will have much more positive and successful lives.

Ward recently updated the mission statement for the nonprofit to be: Julian Pathways, Inc.'s goal is to ensure the well-being of each child, family and individual in Julian and the surrounding rural areas through advocacy, service and support to foster a thriving community.

It will be exciting to see all of the new programs, services and ideas that come from this group. Something that started out so small is going to continue to grow with the support of the Julian Union School District, community leaders and residents of Julian.

As with any nonprofit, Julian Pathways, Inc. operates on grant funding and donations. To learn more about the organization, services offered and how to donate, visit http://www.julianpathways.org.