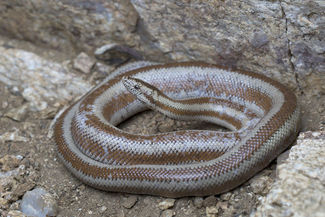 Heat seemed to come quickly to the desert this year along with reports of snake sightings.

A spring season that saw unusually chilly temperatures and lots of rain kept these slithery neighbors inactive, but once things warmed up, they seemed to be everywhere.

While this might not be good news for many, an encounter with snakes in Borrego is likely and those who don't like them might be unhappy to learn that there are about 17 different species they could see here.

While some are very secretive and rarely seen, there are others quite common.

Those who don't like snakes might think every snake is dangerous, in fact there are only four species of rattlesnakes found here that are potentially deadly with venomous bites.

Let's take a look as the snakes you are most likely to encounter around your home or while out hiking in the desert.

Rattlesnakes get a bad reputation because they can inflict a painful, potentially deadly bite. Sidewinders, red diamond, speckled and western rattlesnakes are found here.

The sidewinder is the smallest of the bunch and is named because of its method of travel that make it look like it is moving sideways. This species will also nearly bury itself in sand to wait for approaching prey.

I realize most people have no desire to be close enough to any snake for identification, but two small horns on the head of the sidewinder is a dead giveaway.

The sidewinder also had the capability to change color to make it blend more with surrounding terrain. The sidewinder photo with this story was taken at Font's Point and a dozen people walked by without noticing him tucked into the sand.

Another misconception about rattlesnakes is that they will attack. In reality, given a chance, the rattler will often slink away. They prefer not to engage but like most wild creatures will strike if surprised or threatened.

Bites most often occur when people reach into a place where a snake is hiding, or step on one.

To avoid a painful encounter with a rattlesnake, look before you reach anywhere you can't see, and make noises while working in your garden or hiking in brush. If the snake rattles, stop, back off and go another direction. Given the chance, so will Mr. Rattler. Even rattlesnakes provide an important function in nature by controlling the rodent population, so avoid killing them if at all possible.

If you do find a rattler in your home or garage, simply back off. Local fire departments will frequently assist with removing dangerous snakes. Of course, if bitten by a rattlesnake, call 911 and seek immediate medical attention. Rattlesnake bites are rarely fatal.

In balanced nature, all snakes are good to have around our homes. They help control rodent, insect and spider populations. And even if you don't like snakes, you should learn to identify the dangerous ones at least, and at best simply leave them all alone.

In addition to the obvious sound of buzzing made by the rattlesnake, these pit vipers can also be identified by triangular-shaped heads.

While all are harmless and non-venomous to humans, they can bite, so be careful about handling them. These are not aggressive snakes and in particular, the rosy boa is quite gentle and seems comfortable being handled.

The glossy, lyre and gopher snakes are similar in color with brown and cream markings that cross the body.

Garter and patch-nosed snakes have darker bodies with lighter stripes running the length of the body, while shovel-nosed and kingsnakes have bold color rings around the body. The rosy boa, as the name suggests, can be a beautiful, solid pinkish to rose color.

One of the largest snakes you might encounter is the coachwhip, so named because of a color pattern that resembles the leather braiding of a whip. These are fast moving snakes that can grow to eight feet in length.

Some species are less likely to be encountered, such as the western shovel-nosed and desert night snakes which tend to be most active at night.

Snakes in general suffer from bad press, but they are an important part of the ecosystem. Their food, breeding habits, coloration and habitats can be quite varied and worthy of study for the nature lover.

Good reference books about the reptiles of Anza-Borrego are available at the State Park Store, visitor center or from Anza-Borrego Desert Natural History Association.

One final species I should mention. It's the hoop snake. Very rare around here and so named because if disturbed, it puts the tail in its mouth, forming a hoop and it then rapidly rolls away from danger.

If you chase it, you will notice the hoop getting smaller and smaller. Sometimes the snake will vanish if you continue to chase because it swallows itself.

OK, I just wanted to see if you were paying attention.