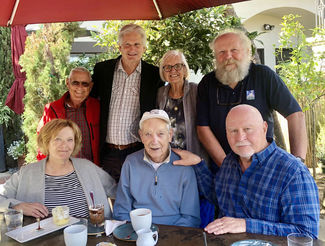 Ralph served on the ABF Board of Trustees for over 25 years, twice serving as President. Over that time, he helped ABF acquire thousands of acres of inholdings and additions to the park and helped to initiate several new programs designed to educate visitors and build constituencies for the desert.

Troy stated, "I worked with Ralph early on as a former Southern Division Chief for State Parks, and for the past 10 years as a fellow trustee. His professionalism and strong business sense help ABF build credibility and stature as one of the leading land trusts in California."

As a former Superintendent of the Colorado Desert District, Van Cleve added, "Ralph took on a key leadership role at a crucial time for the organization. ABF, in addition to its original role of acquiring inholdings, took on the invaluable task of connecting the park to other protected landscapes. This fulfilled the goals of conservation biology and climate change mitigation. He also led the successful project to acquire lands at the Lucky 5 Ranch, which had been a park priority for 50 years."

While unable to attend, author, publisher and former ABF President Diana Lindsay sent along her best wishes thanking Ralph for his years of dedicated service and leadership during the acquisition of Sentenac Canyon and Cienega, the Henderson Canyon Road wildflower area, and the acquisition of the Lucky 5 Ranch.

The luncheon concluded with cake and singing to celebrate, one month early, Ralph's 90th birthday.