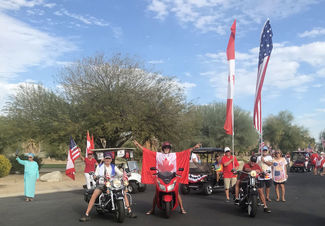 Truth be told, the Canadian people are too nice to actually invade us, so 44 of their golfers (many husband-wife teams) paid a very friendly visit to the Springs at Borrego Golf Course and RV Park from Feb. 20 – 22 for the 11th Annual Can-Am Borrego Cup.

There was a colorful parade on Day-1; an exciting Day-2 afternoon "horserace" where a field of 17 teams – one American, one Canadian – teamed up in Scramble format (alternating shots) with all teams evenly matched in handicap; and golfing on days two and three resulted in Team USA prevailing by a single match and retaining the coveted Borrego Cup. It was Team USA's fourth straight win.

The parade is a special event, with Lady Liberty (Brenda Cook) living up to her repeat grand dame role leading the American and Canadian Flags, team captains, and the Borrego Cup riding backseat to Miss Borrego 2019 – 20, Danielle Del Bono, in a classic '39 Ford convertible coupe around the trailer park. The high-spirited golfers all ended up at the amphitheater for food & refreshments, followed by announcement of the pairings for the Horserace and for the two-day golf event, split up with 22 teams each day.

At the pairings, food and beverages galore, Canadians were invited to sing – after the national anthem of each country led by Lynnette Salton (next year she promises to do Canada's in French) – Canada's answer to what they have that we in the lower 48 don't? Sure, we have the Grand Canyon and lots of other good stuff, but the Canadians' apparent claim to fame is they have "stronger beer." It took about 30 Canadians to make sure everyone got that humorous message.

The Horserace was the most exciting event of the tournament, held after completion of the first morning of golf. Just another warm and beautiful day in Borrego. One Canadian and one American made up each of the 17 teams, selected for near parity in handicaps.

Team USA's Butch Twinning hit a 250-yard boomer on the Par-4 Hole #1, but his partner Gordan Taggert, didn't convert, and they ended up with double bogey. But all teams advanced to the second hole, and once again, Twinning practically knocked the cover off his ball on the t-box, and on the green he 1-putted for an exciting birdie; there were only three pars.

Five teams were eliminated going into the third hole, a Par-3, and Kerry Dennehy & Jim Gravette were the lowest two-hole score going in. With three teams parring the 3rd hole, the second toughest on the course, a team chip-off eliminated all but one team scoring a double bogey, and it was off to Hole #4 with nine teams remaining. Three teams had pars on the fourth hole, so they were in, and four teams vied for the last spot going into the final hole with yet another chip-off.

Then it was crunch time on the Springs signature Hole #9/18. Twinning bombed another one, 30-yards from the water, but Taggert hit a grounder into the water, and that was the end of their run. A missed par-putt made for lots of groans, making it a tie between Donna Schultz (Can) & Randy Budd (Am) and Donna Simpson (Can) and Nels Nelson (Am). It was finally settled with a chip shot closest to the pin between Budd and Nelson, with Randy Budd landing on the green for the win. The crowd went wild.

The team of Dustie Van Winkle (Am) and Gary Roy (Can) placed third in the Horserace, I think.

It should be noted that starting around 11 a.m. on Saturday, cold, stiff wind gusts peaking at 35 – 40 mph blew into Borrego, affecting course conditions (and skill awards) as the Borrego Cup was winding down.

The skills awards were followed by a hearty dinner and cake for dessert, prepared by the players and volunteers. And then came the tally. It was a highly secret thing as to the outcome, so one by one the winning matches were announced, skewed for maximum drama and including three ties, so it came down to the last match – Team USA, under the inspired leadership of Captain Steve Nelson, won by a single match, and they went appropriately wild. Nelson led the team in taking a sip from the Borrego Cup. Team Canada's Captain Kerry Dennehy was gracious in the loss.

This tournament (best ball for each twosome all the way to the hole) was all about friendly competition and camaraderie between two neighboring countries. Dan Wright was thanked for his unbending support for the Can-Am Borrego Cup, where new friends were made on both sides of the border, and fun was had by all. Co-organizer for the event Bob Schultz recited an appropriate quote for the assembled crowd: "World War II was a must win; golf is just a game." Schultz and Kenny Gorsline worked very hard in the shadow of Brandy Casey's previous stewardship of the Borrego Cup.

On a less serious note, Kerry Dennehy, an unwaveringly polite Canadian, all but asked permission to re-invade Borrego next year.