BSHS Alumni: All in the Family 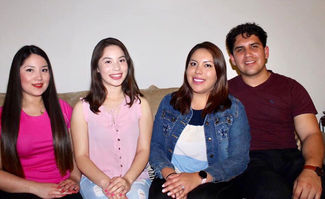 Ramon and Norma Arias, along with their three children, have been living in Borrego Springs since 2009. They have a large, loving, tight-knit, extended family in Borrego Springs, as well. The families gather together to celebrate birthdays, anniversaries, baptisms, and graduations as the fun-loving family they are. They are also proudly supportive of the second and third generations of la familia who are pursuing post-high school education and careers.

The Arias brothers realized that Borrego Springs provided a good opportunity for work and for their families. Willing to work hard, and hoping to provide access to American schools for their future children, they settled in Borrego Springs in the 1980s.

The brothers Ramon, Jose, Adrian, Martin, and Enrique, along with sister Maria, knew about Borrego Springs because their father, Eustolio, had lived here briefly in the early 1960s. The siblings would start work in the construction industry, marry, and have children. Those children had children. If you follow the branches of the family tree, you will find many motivated, successful, and inspiring scholars: Jesus, Clara, and Mariana Arias; Victor Arias; Fernando Alcaraz and Laura Alcarez; and Juan, Miguel, and Sergio Rocha have all taken full advantage of the sacrifices made by the original Arias parents. This story is about one tight-knit group of super stars from the Jose Arias branch.

All three of Jose's children – Jesus, Clara, and Mariana – started attending Borrego schools in 2009. Teachers and staff all remember these new arrivals, how motivated they were, how quickly they learned English, and how they absorbed everything like sponges.

Jesus, the oldest of the siblings, was in 11th grade. However, upon reviewing his transcripts and excellent academic history, teachers and the counselor outlined the benefits of having him enroll as a sophomore so that he could complete the requirements for graduation from a California high school, and be in a position to apply for college. Jesus never looked back.

Clara, a 9th grade student, and Mariana, a third grade student, were just as motivated as their big brother, in part because he was paving the scholarly way for them. They also had the consistent support and encouragement of their parents.

Clara and Jesus enrolled in AVID, which was a high school elective designed to support motivated high school students in college readiness. All three students wanted to learn and improve their academic English quickly so they could have full access to college-prep and advanced classes.

Cecilia Torres, the youngest of the three children of Juan Luis Torres and Abigail Torres Lara, started school in Borrego Springs as a second grader in 2002. Cecy, like Clara and Mariana, has two older siblings who made her acclimation to English and school easier. Cecy also enrolled in the high school AVID program as a freshman.

Jesus Arias and Cecilia (nee Torres) Arias graduated from Borrego Springs High School in 2012 and 2013, respectively. Jesus started at UCSD in Fall 2012, while Cecy started at CSU San Marcos in Fall 2013. Jesus decided to major in Mathematics. He often proclaimed how much he loved math while in high school, and continues to gush over how much he loves math. Cecilia chose to study Kinesiology after developing an interest in health care while completing her Senior Project on the dangers of smoking.

The high school sweethearts, who married in October 2016, invited Jesus' sister Clara, to live with them so that she could begin her studies at CSU San Marcos in Fall 2014.

Finally, in Fall 2018, the youngest sibling Mariana, began attending UCSD. Mariana moved in with her siblings, as well. They have continued to live and study together, and to support each other. I recently had an opportunity to talk to the four of them over a long lunch.

Cecilia and Jesus started dating in high school, and continued while attending college. Cecilia was living in the dorms at CSU San Marcos, and Jesus was living near the cam-pus of UCSD. They tried to spend as much time together as possible. They became engaged, then decided to get an apartment together to save money for their wedding, to save money for college, and to have a place for sister Clara to live while she was attending CSU San Marcos.

When Cecilia and Jesus married, they were in the middle of first semester midterms.

"A lot of people told us not to do it," Jesus said. "They said, 'You're crazy. You're not going to pay attention to classes and you won't finish college,' I felt that having somebody who was going through the same process and same struggles would be beneficial for both of us. Students don't get enough sleep, they have money worries, and have lots of homework. Knowing my wife would be going through the same thing gave me some relief."

Cecy agreed. "We were already spending a lot of time together, helping each other out. We studied together and we visited family in Borrego together. Also, it's expensive to live in separate dorms. We came together to help each other out, but we were also ready to commit to each other."

Jesus and Cecilia married on October 17, 2016. The day before, they each had mid-term exams, then they returned to school on Monday for additional midterms. Jesus related, "I thought it would be impossible to work and go to school, but it makes you more efficient with your time. When I got married, it was like I became an adult. I felt that I couldn't fail, because Cecy as my wife gave me purpose and motivation."

Although Clara graduated from BSHS the same year as Cecy, she had to wait a year to start at CSU San Marcos.

"I had taken a Palomar class during high school, which ended up messing me up with paperwork at CSU San Marcos. I didn't want to go to a community college, I wanted to wait to be able to go to San Marcos."