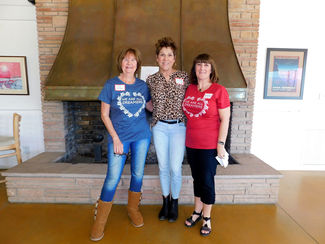 Local Deferred Action for Childhood Arrivals (DACA) expert and co-founder of the Dream Club, Andrea Taylor, said the club was started when the current administration rescinded the program in 2017.

The event began with the reading of an anonymous, but heartfelt letter from the parent of a DACA recipient in our community. The letter expressed gratitude, both for the opportunities that DACA has given this individual's children, as well as for the supportive community of Borrego.

Taylor spoke about some of the harsh realities that many immigrants must live through. Looking into the audience, she said, "Take a moment to imagine this is you: You have lived in the U.S. since as far back as your memory takes you. You are a law abiding person. All of that is taken from you and you are deported alone back to a country you don't even know or remember. This happens on a daily basis." This is a chilling insight into the reality that DACA recipients, or Dreamers, face every day.

This immigration policy allows eligible participants a two-year renewable government work visa. Eligibility requirements are stiff: a Dreamer must have arrived in the U.S. prior to June of 2007 and before turning sixteen but not older than 30, be in high school, college, or the military, have no criminal background, pay the $495 fee, and pass a government background check – which happens every two years in order to renew the visa. Dreamers, those who entered the U.S. typically as small children that came with relatives or other adults, are protected from deportation only while their DACA is active.

The current administration began taking steps to rescind the pol-icy permanently and there have been several lawsuits filed over the decision. The U.S. Supreme Court has reviewed the legal cases and is expected to have a decision ready by June of this year. While Dreamers can still technically submit renewals for their DACA status, no first time applications are being accept-ed, and it is unclear what the decision will be.

Dreamers are living in what Taylor has described as a "legal limbo." DACA does not provide access to citizenship; Dreamers who have not found a pathway to a legal status face a potentially bleak out-come in the near future.

Esmeralda Flores spoke on how federal policies affect people at a local level. For example, in April of 2019 the "safe release" policy ended abruptly, meaning that those seeking asylum were no longer given assistance in securing transportation to family or sponsors after coming into the country.

In San Diego, asylum seekers were dropped off at a bus station with no resources. She explained that the ACLU, along with other organizations, helped to create an emergency shelter.

An audience member asked Flores her opinion on whether undocumented individuals should participate in the upcoming 2020 Census. She advised that everyone should participate in the census. Information reported to the census remains confidential and is only used for statistical purposes; it is unlawful for the Census Bureau to share reported information with immigration agencies.

A Dreamer, turned American Citizen, also volunteered her time for the presentation and gave a brief but inspiring story about growing up undocumented and how DACA changed her life. She recalled having to work harder than others for the same opportunities, and not being able to share important life experiences with her peers. When DACA was enacted, she was finally able to get a driver's license as an adult and live without the constant fear of deportation.

While Dreamers pay into social security, medicare, and other federal benefits, they receive absolutely no federal aid in return.