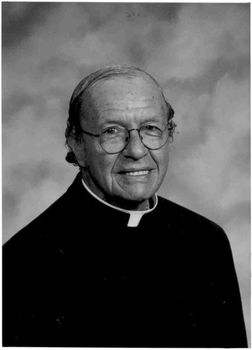 The Rev. Simon P. Lefebvre, C.S.V. passed away peacefully Jan. 13, 2020 at the Viatorian Province Center in Arlington Heights, Illinois. He was 92. Fr. Lefebvre was born Aug. 21, 1927 in Marthe, Quebec, Canada, the son of Arthur and Alice (Seguin) Lefebvre, who preceded him in death.

He made his first profession of vows with the Viatorians in Montreal in 1946, his final profession on March 19, 1956 in Arlington Heights, and was ordained Aug. 15, 1956 in Chicago.

As a Viatorian, Fr. Lefebvre started his teaching career at Spalding Institute in Peoria, at Bishop Gorman High School in Las Vegas and at College Bourget in Quebec.

But a memorable part of his assignments was in East Asia, including teaching at St. Viator High School in Taiwan before teaching Chinese studies at the University of Hong Kong in the early 1970s.

In 1975, he was named an Assistant Professor at Chung-Hsin National University and Providence College in Taiwan.

Fr. Lefebvre spent the rest of his ministry in parish work, serv-ing at parishes in California: St. Rose of Lima Parish, Chula Vista, St. Charles Borromeo Parish and Blessed Sacrament Parish, both in San Diego, and as Pastor of St. Richard Parish in Borrego Springs.

He retired to Aguanga, California in 2004, where he resided until moving to the Viatorian retirement residence in 2016. Fr. Lefebvre was preceded in death by his two brothers, Raymond and Andre and his sisters, Loretta Lefebvre and Pauline McLeod. He is survived by his brothers Jean and Louis and his sisters Jean Coolins and Lena Baker, as well as many nieces and nephews.