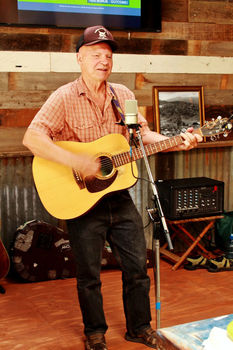 Kim Allynn Beck was born on June 24, 1937 in Glendale, CA to Helen and Harry Beck. Helen, an artist and writer, was inspired to name her only son, "Kim" after a well-known character by the famous novelist, Rudyard Kipling. Harry's business was buying, fixing and selling pianos. As a boy, Kim helped refurbish, refinish, and tune the pianos. He also received classical piano training. At an early age, Kim taught himself to play guitar as well, in order to accompany Harry, who had a habit of playing WW1 tunes on his mandolin for hours. This early exposure to music set the tone for Kim's lifelong career as a musician.

At the age of twelve, Kim impressed school audiences playing the music of Mozart, and by high school he and his sister, Nanci had already formed their own country music band. They played local venues for years. When Kim was still in grade school, the family moved from North Hollywood to Valley Center, where Kim enjoyed ranch life helping out with the care of animals, gardening and hiking. When his parents bought a motel in Clear Lake, CA, he recalled happy memories rowing around the lake and hiking in the area. The family eventually settled in Escondido, where Kim graduated from Escondido High in 1955 before joining the National Guard.

Kim went on to play piano and guitar in various night clubs throughout San Diego County by night and to teach music lessons by day. While playing for a dance in Julian, Kim met his future wife, Jo Huntamer. They raised their two daughters, Kathleen and Jeannie in Escondido. Kim taught his daughters to play music at any early age and nurtured two all-girl bands of theirs, one in elementary and the other in high school. Kim also got a job playing piano on the Cal Worthington Dodge shows on TV. When the girls were in Jr. High, the family moved to Julian where Kim played at the Pine Hills Lodge three nights a week and in La Mesa three nights a week. Kim's music could be heard on local live radio stations where he backed up many country music stars, including Glen Campbell, the Otwell Twins of the Lawrence Welk Show, Sammi Smith and Smokey Rogers.

When Kim and Jo divorced, Kim moved on to Riverside County where he eventually met and married Elise Pettit. Between jobs in Hemet, Apple Valley, and Cambria, he and Elise paused long enough in San Luis Obispo for Kim's third daughter, Darby Ann to be born. After a stint in Elko, Nevada with Billy Mize, Kim and his new family returned to Riverside; moving in with a steel-guitar player and his family. Kim then landed a regular job playing five nights a week in Winchester. Kim and his family settled in Sun City where Elise worked in a medical office and Darby attended and finished high school. Later, when Darby had children, Kim became a stay-at-home Grandpa to chip in with child care so Darby could pursue a career. When Darby and her family moved out of state, their bond remained close and they visited as often as possible.

Jeannie experienced the perils of a musician's life when Kim's band had a gig at the Stateline Casino in Wendover, Nevada. At the last minute the band's "girl singer" cancelled and on short notice Jeannie agreed to fill in. Near the end of the gig the band member who drove the band out, (because he was the one with a van) got drunk and left the whole band stranded in Nevada. Kim had to buy an old clunker just to haul the band home.

Kim enjoyed playing music with his daughter, Kathleen, whenever the two got together and always looked forward to Kathleen's annual Spring music jam in Julian. This is when he got to play music with Kathleen, various family members, friends and a lot of other great musicians just for the fun of it.

When Kim and Elise got divorced, Kim eventually met his final partner, Donna Dewey. They spent nine years sharing a love of music and dancing together. Donna was not only Kim's number one fan, accompanying him to gigs, but also something of a roadie, helping to pack up and load instruments. They also enjoyed traveling and visiting with family and friends.

For the last several years of his life, Kim played with Ray Poe's band, "Pickin Time," in Lemon Grove. He enjoyed playing with this band so much that he regretted having to cancel a gig with them, just weeks before he passed. Kim was inducted into the Western Swing Hall of Fame in Sacramento in 2014. He was also inducted into the Northwest Hall of Fame in Washington in 2016.

Kim played and sang right up to his last days on earth, surrounded by his daughters and family. He passed away at home on November 17, 2019 of leukemia, with Donna at his side.

Kim's celebration of life will be held at the Veterans- Foreign Wars post in Lemon Grove off of Federal Blvd and College Ave. at 2 p.m. on March 22. All are welcome for refreshments and the music of Pickin Time, short one fantastic piano player, as fate would have it.