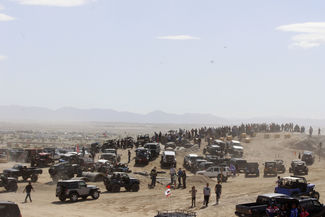 Going down S22, just a few miles past all the brittlebush slowly blooming, the desert sunflowers and lupins attempting to make their appearance. There are dirt mountains on the side of the road, lots and lots of dirt, creating high dust clouds.

As one takes a closer look, past all the cars making their way down, you see over 60,000 off-roaders from all over the country on bikes, buggies and trucks. These dirt loving, fun having, adventure seeking enthusiast gathered for the annual three-day event that is Tierra Del Sol.

The 58th annual Tierra Del Sol Desert Safari at Ocotillo Wells State Vehicular Recreation Area, to many known as Truckhaven, was an event not to be missed.

Enthusiasts spend months on end and thousands of dollars preparing for such events like this. For specific tires to go through trenches of dirt and obstacles, many spend up to $800 on just one tire. Just one.

Many drivers, experienced or not, show off their hard working vehicles and incredible talents on obstacles that are fairly easy to drive over like speed bump tubes covered in dirt to downright crazy difficult ones where you could possibly get stuck between boulders.

Drivers made their way over obstacles, while some faced minor setbacks, causing a fuel tank rupture. Thought going over obstacles was already difficult? One made its way, backwards, Yup, backwards and did it with no difficulties whatsoever.

One brave driver made the daring climb up a hill made of nine concrete tubes to face the drop. This steep drop, if not done correctly, could be fatal.

He made his way up, and the crowd looked on to see if he will make it down. Chants grew louder as the driver revved his engine, ready to face his match. In the blink of an eye and back tires in the air, the driver made it down successfully. After five minutes of celebrating, he went, to do it one more time, and he did.

Two visitors from the Palm Springs area have been coming to TDS for the last five years, and say they hope to bring their own buggy named "The Bugs" to the event next year, and would like to attempt the hill.

Not too far from the hill was a moderate-leveled ditch obstacle filled with a few boulders. Crowds gathered to see if a jeep would be able to make it through the closely tight ditch. With help from the crowd and cheering encouragement, the jeep revved its tires over the boulders and came right out. Another 4X4 attempted the task, it was deemed too difficult, as many assisted in pulling them out.

If one hasn't experienced this event, there's always next year to enjoy it. Word of advice: Bring protective gear for your face and a ton of sunscreen. Also, make sure to prepare a nice bath when you get home and place all the dirt you gathered in a jar as memories.