Super Bloom Update: Will There Be Flowers? 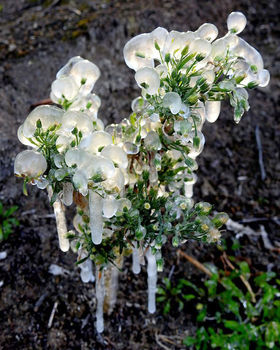 Only 0.03 inches. The rainfall accumulation in Borrego for the entire month of January 2020 was the lowest in five years. Measured at the Park HQ rain gauge, a barely measurable three one-hundredths of an inch fell last month.

And as if this writing, with less than two weeks before we run out of days in February but with some rain at month's end in the forecast, it looks like there will still be a bloom of some sort, just not a Super one.

Tom Chester of the Bloom Report comments, "Probably a typical decent flower year, with mostly-small annuals present in most places. Although the rainy season started out wonderfully, there has been no significant rainfall since December 28 average rainfall typically produces average flowers, not a Super Bloom."

The Report also goes on to say, "This season doesn't look like a Super Bloom; probably a normal or below normal bloom if we don't get rain very soon. Not everything is lost, because a good February rain could turn things around pretty quickly." Fortunately, the plants on the "first to bloom" list are showing signs of life.

But hope springs eternal. An over-night light sprinkling of 0.21-inches (Park HQ rain gauge, up to a half-inch in higher elevations) ending on Monday Feb.10, was the first soaking since the onset of seed germination, and wildflower experts like Tom Chester says there are several areas with wildflowers.

These are typically the first areas to bloom (see photos), but more rain and mild temps (with no freezes) are needed to move up from "normal bloom" to "Super Bloom" status in the remaining days of February and early March.

The rainfall prior to the Super Bloom in March 2017 is the bench-mark against which subsequent Blooms (and logistical nightmares with mass influx of tourists) can be measured, so we'll use that for comparison purposes.

Here are the Park HQ rain gauge numbers for total rainfall accumulation in the months of January and February for the past five years:

In order to have a Super Bloom comparable to 2017, we need to get very wet for the remainder of February and into early March; some rain is at the very end of the two-week forecast.

The sprinkling on Feb. 10 helped, but not much. In 2017, we received a 1.5-inch soaking on Feb. 27 that led to the subsequent wild-flower explosion. If we get sufficient rain this month, followed in March by mild, warming temps, no frost, and low winds, we could still be in for another decent showing, but we're going to have to wait and see what the end of February brings.

While wildflower connoisseurs are already reporting small blooms, they're also seeing frost damage in a few areas. Not good, but if temperatures warm up, at least it won't be a bloom disaster heading into March.

Here's a summary of what the Bloom Report says on the wild-flower situation prior to the Feb. 10 sprinkling. Two wildflower areas are highlighted:

"In Coyote Canyon, water in First, Second and Third crossing; at second crossing, water is a bit deeper than usual. Bloom is best between Zero and First Crossing. A nice display of Malacothrix glabrata (Desert dandelion) mixed with some Phacelia distans (Common phacelia), the occasional Rafinesquia neomexicana (Desert chicory), and small Abronia villosa villosa (Desert sand verbena). The dis-play is good but not spectacular; for this area it's above aver-age."

"Henderson Canyon Road is one of the main flower tourist attractions.

A comparison between yearly blooms is shown in Graphic-1. It shows that, given our nearly flatlined rainfall accumulation in January, and less than a quarter-inch so far in February, we have a pretty steep hill to climb in order to reach the lofty heights of Super Bloom status.

Weeds are a problem again this year, overtaking and smothering some wildflower areas, especially near roads and highways where wildflowers are otherwise easy to admire after a quick stop.