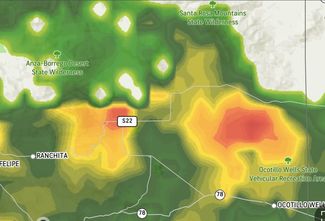 After almost no rain in January and February this year, we finally got some – a full inch on March 10 and another 1.4 inches on March 12; the total precipitation thus far in March is 2.61 inches (the highest March total in six years at the Park HQ rain gauge). The total seasonal rainfall to date (the season ends in mid-April) stands at 5.9 inches, just below our long-term average. More rain is forecast the week of this issue.

An interesting note: In the Jan. 9 issue of the Borrego Sun, we reported that the folks at Farmer's Almanac were forecasting "a rather significant two-inch rainfall increase in March" for a very large region in Southern California that included Borrego. Spot on!

The accompanying radar image shows heavy rain cells over Christmas Circle and to the east on March 12. Heavy rains over Fonts Point and the Badlands caused minor flash flooding in the wash that crosses S-22 at the entrance to Fonts Point; the Sheriff's Department closed S-22 for several hours in both directions at that location. Borrego Springs had mild flooding down Palm Canyon Drive, but nothing serious.

Prior to last year's Super Bloom, the total precipitation in January and February was over five inches, plus an additional 0.4 inches in March.

As to the potential for a wildflower bloom this year, our late season rains, cool but non-freezing temperatures, and mild winds thus far make it reasonable to speculate that seeds are still viable but there won't be a Super Bloom; a late bloom is more likely, but still of uncertain magnitude.

The two-week weather forecast from AccuWeather up through March 27 shows, as mentioned above, another two days of rain beginning on March 18 – 19, with temperatures ranging from lows in the hi-40s to highs in the low- to mid-70s. They forecast it will reach 81-degrees on March 21, and because heat above 80-degrees kills the Coronavirus, that's at least something positive to mark the start of Spring. On the potential downside, if the rains on March 18 – 19 are heavy enough to wipe out the wildflowers starting to bloom, that will be a disappointment.

With the Coronavirus pandemic upon us, it is perhaps a good thing that the bloom is at least being delayed – virus carriers or actually infected tourists are currently minimal and may not invade in large numbers any time soon, given all the self- and government-imposed travel and flight restrictions either now or soon to go in effect.

Meanwhile, the desert is just starting to come alive with wildflowers in certain areas, just not as many as in Super Bloom years. Lupins and other familiar perennials are visible along the roadside of S-22 heading towards Salton Sea, and patches are flowering along Hwy. 78.

In the coming days, if we get a few light rains, followed by sunshine and warming temps, we could still witness a healthy bloom this season.