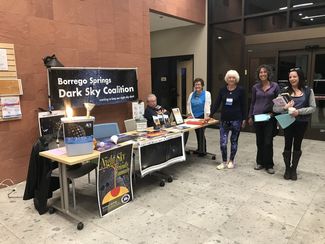 Mitchell Walker didn't realize he had used the Cartesian Coordinate System (X, Y, Z axis configuration) to construct his Stellarium. But he had the right idea, using right ascension, declination, and distance in light years.

The Stellarium is a Plexiglas cube 30 inches on a side built to a scale of three inches per 10 light years, showing the nearby stars, suspended on filaments, with their spectral types out to 100 light years from the Sun.

"May this presentation give you a better understanding of an extraordinary and amazing neighborhood," says the accompanying plaque. It was certainly fascinating and informative!

Walker's exhibit was part of the Feb. 27 gathering at the Library for the Borrego community put on by the San Diego Astronomical Association (SDAA) and our own Dark Sky Coalition (DSC). Dave Decker from SDAA and Jim & Grace Rickard from DSC were on hand to answer questions and help folks in their telescopic pursuits.

The mood was somewhat solemn at the 5:30 p.m. opening of the event due to cloudy skies that looked rather permanent for the evening. However, Assistant Librarian Cristin McVey wins a nickel because she predicted the skies would clear later, and they did.

But before the Moon and Venus broke through the clouds, visitors read up on the latest Dark Sky literature, talked with the astronomers and organization reps, and even watched a video on how to minimize light pollution in our officially recognized International Dark Sky Community. Shading an exterior light fixture, with proper wattage and color, and pointing it toward the ground is a great way to start.

But back to Walker's Stellarium for a moment. It took him over a year to construct, and he's not an astronomer. Rather, he was an architectural draftsman at TRW who saw a small box-like representation that inspired him to build his Stellarium.

The patience and dedication required for this project is obvious upon close inspection, each star located precisely in its relative three-dimensional position. At this scale, the Milky Way Galaxy, over 100,000 light-years in diameter, would be half a mile in diameter. Walker takes his Stellarium, set on wheels, on tour for educational purposes, and it's as big as he can manage without a forklift.

An alien also showed up for a visit to demonstrate the wonders of his Theramin, an electronics/capacitor-based sound effects device. Nearby movement towards and away from the antenna generates a variable sound familiar to Sci-Fi enthusiasts, high pitched and eerie synthetic tones used in films such as War of the Worlds by those scary tripod creatures. John Young provided interpretation for the Alien's otherwise unintelligible explanation.

By 6:30 p.m., the skies were clearing, and folks could go out to the telescopes to view the crescent moon with Venus close by, the constellation Orion and its famous nebula, and other wonders of the universe.

After a cloudy beginning, it was a good night be in Borrego near a telescope under a dark sky filled with a crescent moon, planets, and stars galore.