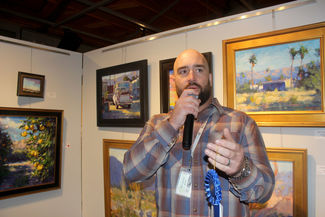 “I want it to grab me,” said 14th Plein Air Invitational two-hour Quick Draw judge and BAI Gallery Director/Curator Barbara Nickerson, “and with more rewards up close.” And that certainly was the winning combination for First Place finisher Richard Prather, a first-time event artist from New Mexico. His painting on Day-2 of the competition in the desert landscape surrounding the Park Visitors Center was smaller than the other 14 entries, yet striking from afar, and up close unmatched in its exquisite detail. He also won the People’s Choice award in the week-long competition.

The competition continued throughout the week, with 15 artists completing one, two, even three paintings a day – pastel, acrylic, and oil. It all came to an end with the Awards Ceremony March 7 at the Borrego Art Institute, where a packed house checked out the artwork, some of the works were sold (but will be remain for public viewing) and devoured Kesling’s Kitchen Chef Tom’s appetizers.

Guest judge Scott Prior, out of San Diego, reviewed the entries and came to his decisions.

The First Place award went to Ryan Jensen for his painting, “White Truck.” He thanked his fellow artists, sponsors, and BAI execs and staff for the experience. Later, he said he had switched from drawings to paintings only three years ago, so his top award came as bit of a surprise.

All of the awards were sponsored by: Dennis & Sharon Nourse for First, Second and Third Place ribbons, plus People’s Choice; Borrego Outfitters for Artist’s Choice; O’Dunn’s company for Curator’s Choice, and King of Frames for the three Honorable Mentions.

The entries will be on display at the BAI until March 29. There are some truly remarkable works at this exhibit, and Borregans should stop in and see them sometime this month.