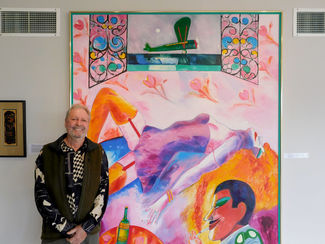 The Galleria at the Palms hosted an opening reception Feb. 9, for the John Richen art collection. Richen has shown his art all over the world and has been commissioned for sculptures, two of which permanently reside at the New Salem Health Rehabilitation Center for Children in Oregon.

If you have ever had the pleasure of seeing one of Richen's metal-fabricated sculptures (like "Wind Horse," recently displayed at the Borrego Art Institute for the Celebrating the Earth's Elements show), you might describe it as delicate and whimsical while maintaining a sense of strength and balance. You could also describe his collection of art in much the same way.

The Palms at Indian Head Hotel was a choice location to display the collection; the building is a mid-century modern wonderland, complete with glass walls, clerestories, and polished concrete floors.

The gallery space filled up quickly, as guests enjoyed the complimentary wine and tasty hors d'Oeuvres. Although it was a rare rainy day in Borrego, the gallery space was bright and airy, filled with happy chatter and intrigued art viewers. Richen explained that many of the works were created by friends, col-leagues, and family. There are just over 20 artworks on display, and a couple have already been purchased.

It is clear that this show was curated with fondness and famil-iarity. The collection consisted of paintings, prints, furniture and vases, pressed paper, and charcoal drawings, among other mediums. Richen's collection is uninhibited, and leaves one contemplating the human condition while enjoying the mauves, oranges, pinks, and blues that seem to jump right out of the artworks.

One of the first works on display as you walk into the gallery is a very large piece by Earl Linderman. In a Linderman classic style, the reappearing character Doktor Thrill is featured with a woman wearing a satisfied expression and donning a huge red mane. Above the two figures is another symbol that Linderman used often, a WWII era airplane.

Directly across the room on the opposite wall of the Linderman piece, is another large painting by Jerome Tupa, a Benedictine monk, titled "Swordsman" of the Four Horseman Series, featuring, as the name suggests, a swordsman riding a horse. At first glance, the painting is not as frightening as the name might imply, but surging with motion and color. It takes a while to realize just how juxtaposed the two pieces are with one another; one embraces the luxury of lust and life, and the other, is apocalyptic in nature. One of the most intriguing contrasts between the two is not a contrast at all, but a likeness.

There is a cycle of life and death in each painting, and a greater cycle created by the tension of the two in the same room. And that's just the beginning, the rest of the gallery you must see for yourself.