Hal Hawkins at The Propeller 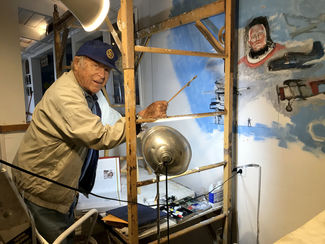 WW-II transport pilot Hal Hawkins at work on his mural at The Propeller restau-rant, "opening soon," depicting his experience and that of his friend and former astronaut John Glenn after the Marine Corps landing on Iwo Jima. Details on their exploits and photo of the completed mural in the March 5 issue of the Borrego Sun.