Everybody Laughs at "No Body" 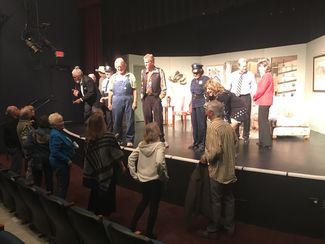 Boy did folks need some laughs last week, and they got them from the production of "No Body Like Jimmy" at three showings at the Borrego Springs Performing Arts Center March 13 – 15.

With restrictions on crowd size to less than 250 people due to the Coronavirus pandemic, the BSPAC Board of Directors decided the show should go on, with attendees put on notice via email: "We are relying on the good judgement of our patrons that anyone who is showing signs of a respiratory illness and might spread disease should not attend."

In response, the attendance was relatively low, yet there wasn't so much as a single laugh-induced cough during the performance, although laughter was, excuse the pun, feverish. And after curtain call, the cast used "social distancing" in lieu of close public contact in the hallway.

The premise of this stage comedy farce by Burton Bumgarner is only a bit similar to the wildly popular "Weekend at Bernie's" from the late-1980's where the dead Bernie gets transported from place to place. But in "No Body," based on Bumgarner's book written in 2012, Jimmy is already dead from a mob hit job when Harold, a ne're-do-well troublemaker, shows up at the home of his longtime buddy Ralph to help stash the body.

But there's a problem: Ralph's wife, Eloise, is about to throw a party to kick off her campaign for congress, with an A-list of party-goers about to show up, including a wealthy couple from Texas with money to donate to her campaign.

As the story unfolds, it's a case of the audience having to suspend disbelief on many occasions, but because it's a farce, and a well written one to boot, it works because the cast made it funny.

The hilarity ensues when Eloise and arriving guests don't realize that Jimmy is dead and is merely propped up on the couch. They begin, and even end one-way conversations with him, revealing their own insecurities about themselves and their situations. The dialogue is priceless. And the physical change of location of Jimmy's body is pretty much restricted to his movements on the couch, and on occasion when he sinks to the floor, but it's all well staged and funny, as well.

First, let's concentrate on theatrical presence, specifically that of Jimmy. He was, shall we say, brilliantly catatonic. Sure, he's dead, but his corpse still somehow manages to show signs of life on stage, albeit with a comical mobility foisted on him by others at the party who don't realize his lifeless state of being.

The comedy dynamic changes when, one by one, folks do realize that Jimmy is dead, and becomes even more complicated as they each in turn mistakenly implicate themselves in Jimmy's death. Police officer Linda, accompanied by her less than street-qualified female partner, Officer Cooper, tries to sort it all out, but sorting this one out is a challenge on many fronts.

Officer Linda (Elaine Hazelrigg) doesn't exactly get straight answers from the party attendees, at least at first, and Officer Cooper (Mary Anne Luty) is less than successful in managing the potential perps – and that's everyone except Jimmy (Richard Dopp), who obviously has nothing to offer verbally about the situation: Harold (Steve Gannon), who actually abetted in the crime but has a rap sheet that keeps his credibility with law enforcement barely above zero.

Ralph (Gary Edwards), is fearful long past paranoia about abetting in the crime and in the process losing a big donor and subsequent bad publicity, thus quashing his wife's ambitions; Eloise (Ernarae Bisset) despises Harold and wants only for him to be out of the way to clear her path to public office; and caterer Baxter (Jay Hazelrigg) who becomes more comically inebriated over time.

Diane (Jennie Edwards), a previously successful campaign manager whose low-key manner is eclipsed by rapid-fire emotional rants of true comic proportions; Nigel (Craig Johnson), the grandiose and faux-intellectual speechwriter who crashed into a light pole and unknowingly ran over Jimmy's already dead body; and the wealthy Texas couple, the Pittmans - Rick (John Young) and Emma (Micky Alfont) - where Emma is the personification of obfuscation, not to mention gold-digging eye candy.

You can readily see here the general difficulties with truth-telling and transparency to law enforcement. But in the end, as it should be, everyone lives happily ever after.

Under George Keith's direction and Elaine Hazelrigg's producer skills, "No Body Like Jimmy" was a comical respite from the unnerving situation we all find ourselves in right now. Many thanks to the cast for all the much-needed laughs.