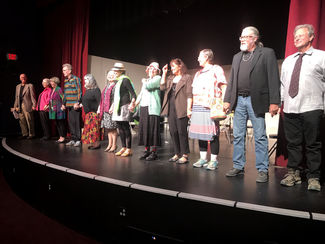 Take a good look at the lineup of jurors in the photo. If ever you’re called for jury duty and get stuck with any one of these whackos on your panel, do something rash, anything, such as faking a heart attack to be excused. If not, you’ll be stuck with an open and shut case of “guilty!” that devolves into “Not guilty with an insane explanation.”

The Readers Theatre is alive and well at BSPAC, an opportunity for regular folks who love theatre to participate, and get laughs, without having to memorize lots of dialogue and attend a long string of rehearsals. To a large degree, it works, and “12 Incompetent Jurors” works because of the comedic intent of playwright Ian McWethy in his choice of dialogue from quirky characters all. Missing only are the rapid-fire comebacks and dialogue deliveries one gets when lines are memorized and staging is well-rehearsed, but the comedy in this performance was still ripe for the picking. And Artistic Director George Keith squeezed as much comic juice out of the cast as possible.

The story line? Well, here goes: A certain Mr. Pleats stole half a dozen cats, was caught on video doing it and also in front of witnesses, and he confessed in the courtroom to the act, so even the judge (Elaine Hazelrigg) pronounces the man guilty before the jury deliberates, but in the jury room lone juror #8 (Jeff Salton) holds out and comes up with every excuse possible for a Not Guilty verdict, including not only the repeated false claim that Mr. Pleats is on trial for his life when it’s actually a maximum six-month sentence, but also how the whole incident was maybe, perhaps, possibly not what it looked like. To the horror of the other 11 jurors who are wanting only to cast their guilty vote and go home, but one by one their sense of justice prevents them from a rash decision, yet they can’t even agree on what the temperature the room should be so there’s a strong likelihood of a hung jury on the critical need for unanimity. Yet, everyone does agree that the European emigre woman, juror #12 (Jennie Edwards), doesn’t understand English and misinterprets just about everything but also that she can’t smoke in the room, and that juror #9 (Anne Wesley) shouldn’t be hoarding all her French fries as juror #2 (Karen Bobren) is so smitten with anxiety at public speaking she can’t get out a coherent sentence.

Juror #4 (Gary Edwards) is busy texting, oblivious to any sense of justice or even his willingness to keep time on his phone, while juror #8 and the jury foreman (Barbara Coates) test out a bizarre theory of the case of how long it takes to walk 20 feet and still see Mr. Pleats drive away from the scene of the crime, but of course are painfully slow afoot across the stage and get lost in their personal conversation that takes four minutes, so how could Mr. Pleats have possibly been seen driving away by these two old fogeys when he was probably long gone by then.

Get the gist? It’s a funny play with quirky and interesting characters and story line, suspension of disbelief notwithstanding, and the laughs flowed freely.

We’ll see more of these Readers Theatre pieces, and that’s a good thing.