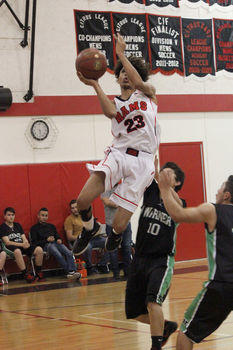 The Borrego Springs boys' basketball team avenged their last month loss to the Warner Springs Wildcats with a 51 – 41 win, Jan. 30. It surely was a better outcome for the Rams who did not want to have to go through another heartbreaker in overtime, and get out-rebounded.

It seemed that both teams could not connect with the basket in the third quarter, and yet another comeback in the fourth was in the works, but the Rams managed to keep the lead for the win.

"We've been hitting our stride as of late. We've been playing a lot better as a team, have been getting a lot of the players scoring, not just one person. The ball is getting spread out a lot better. Our defense is kind of clicking better. The first half it showed, but for some reason, it became relaxed in the second half, allowing them to score and get the rebounds on us," head coach Mauricio Polanco said.

The last time the Rams faced the Wildcats, the game was sent into overtime, and after being out-rebounded, the loss showed, 49 – 41.

The first quarter of the game was back-and-forth, starting off hot.

The Rams were on the board first with a jumper in the paint by senior forward Andres Reyes, but they were answered right back with a layup by the Wildcats.

A rebound by junior guard Cam'mron Jambor put the Rams back up, but were answered right again to tie it back up.

Midway through the first, the Wildcats took the lead after sinking in a free throw and a three-point play, 8 – 4.

Less than two minutes to go, the Rams tied the game up at 10, after a layup by Reyes.

In 45 seconds, the Rams managed to make consecutive shots to take a 17 – 12 lead heading into the second quarter,

Back-and-forth the two teams went in the second, and then Reyes hit a shot behind the arc on the right side. Sophomore forward Daniel Arias followed, and hit one on the same side.

The Wildcats put up a floater, but was answered back by yet another three on the same side, this time by Jambor. The crowd went even wilder than they already were.

Midway through the second, junior guard Blaine Shugart managed to get a steal and assisted Jambor, 33 – 18, Rams led.

With not much happening at the basket in the third quarter, a slower pace from the first half, both teams continued to exchange baskets, but the Rams were still up, 42 – 26.

It came down to the fourth quarter, as the Wildcats began to pick up their momentum and found some rhythm.

With 6:41 on the clock, Jambor sank in two free throws. From there, the Wildcats controlled two minutes of the game, enough to begin their comeback.

Midway through the fourth, the Rams stopped the run with a layup by Jambor, assisted by Arias, followed by a floater by junior guard Saul Magdaleno, 48 – 34.

Despite the Wildcats attempts at chipping away the Rams' lead, the Rams defense stepped it up, to seal the win, 51 – 41.

The team also faced the Julian Eagles and Bonsall, which took place after print.

The Rams defeated the Eagles, 48 – 24, the last time they faced. Bonsall is a new opponent for the Rams this season, and Polanco is optimistic about the outcome of both games.

The Rams are back on the court 7 p.m. Feb. 7 at home, set to face a tough Vincent Memorial team, who are currently undefeated on the season, and ranked number 9 in the San Diego Section Division 5 rankings.

"Going into the game, we just need to stay aggressive, play as hard as they can, and no matter what the scoreboard looks like to not give up. I just need to have them to keep up the hard work, and the biggest thing is to have everyone go into the game healthy," Polanco said.