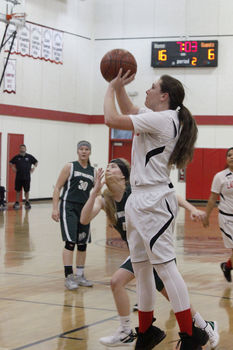 The Borrego Springs Lady Rams basketball team did not mess around this time when facing uphill opponent Warner Springs. In a Manzanita League matchup Jan. 30, the team made sure to avoid any previous mistakes and put in the work like they know how to, getting the win, 55 – 41.

"So excited. Tonight I wanted to keep the pedal to the metal a little bit, that's why we built such a big lead and why I kept the girls in the entire first half, and then started subbing everybody out in the second half," head coach Tim White said.

"I thought the seconds went in and played great. They came back on us a little bit there, but very proud of the way the whole team played. Tremendous win.

The last time these two teams faced, the Lady Rams avoided the loss and overtime with a last second three-pointer by junior guard Marla Manzano.

However, it should not have been that close in the first place.

"When we played them at Warner, we rotated quite often and subbed more because we got up big so early and we let them claw and scrape back into the game. If we didn't have to win it at the buzzer with a three-point shot from Marla (Manzano) to actually win that game, it would have been way nicer." White said.

Right from the get go, the Lady Rams were on the board first. The tip-off was won by the Lady Rams and was easily converted to a layup by Manzano.

Manzano then again, helped put the Rams up 6 – 0 after a floater and sinking in two free throws.

The Lady Wildcats got back-to-back steals for layups to get on the board, and cut the Lady Rams lead, 6 – 4.

Senior forward Delaney Barclay put the rebound, followed by a shot by Manzano to lead 10 – 4.

The Lady Wildcats put up one more shot, but could not match the fire in Manzano, who was connecting with the basket. As time expired in the first, she put a shot behind the arc, 16 – 6, Lady Rams led.

To begin the second quarter, the Lady Wildcats put up a jumper in the paint, but they were countered by an aggressive rebound by junior forward Laurynn Strate.

Midway through the second, both teams were back-and-forth on the court, but the Lady Rams led 29 – 14 heading into the half.

The first two minutes, the Lady Rams continued right where they left off, beginning with a put back rebound by Barclay and jump shot by Strate.

The Lady Wildcats offense picked it up, with consecutive shots, 38 – 23.

However, heading into the fourth, the Lady Rams still had a solid 44 – 25 lead.

The Lady Wildcats caught fire attempting to make a comeback like the JV boys basketball team did.

With consecutive made free throws and steals to convert to layups, they were slowly but surely cutting their deficit.

However, it was not enough to get past the lead the Lady Rams had already built up, as the Lady Rams walked away with the 55 – 41 win.

It surely was a scary fourth quarter, but they had prevailed.

The Lady Rams face their toughest opponent yet again, this time at home. They will go head-to-head with the league's only undefeated team, the Vincent Memorial Lady Scots at 4 p.m. Friday Feb. 7, which is senior night, as the team honors its lone senior, Barclay.

"Next game against Vincent Memorial is going to be a colossal battle. We're going to have to have an amazing game from everybody across the board in order to beat them," White said.

The Lady Scots are ranked second in the San Diego Section Division 5 Rankings, and 17th in California Division 5.