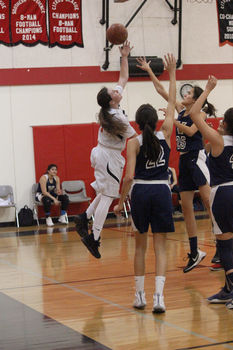 The Lady Rams played to the best of their ability against one of their toughest opponents, Vincent Memorial, who undeniably proves to show why they are the league's only undefeated team, holding the Lady Rams to just six points in the first half. They took the lead and never looked back, defeating the Lady Rams, 63 – 17.

At home, however, it still wasn't the outcome they wanted, but for the positive's, head coach Tim White was pleased at the effort each player put in, and the not giving up despite what the score board said.

"Well we worked on all week trying to beat their press and also try to put more pressure on them. We did an OK job of that, but they're a 21 – 0 team for a reason, they're dominating our county, not just our division," White said.

"Our goal coming in was to win if we can, but the main thing I focused on was for us to get better. To have a better outing than the last time. The last time they beat us 65 –10, and we doubled our output in points, we held them to about the same amount of points, and that's a tremendously talented, well-coached team. The best in our section, the best in the county, and I really am just proud of our girls efforts tonight and how we got better."

The team also faced Mountain Empire and West Shores in the last two away games of the season, and fell 45 – 42 and 29 – 23, respectively.

The Lady Rams just seemed to not be able to connect with the basket, and the Lady Scots took advantage of that, building the lead early in the game.

In the first quarter, the Lady Rams had to break through the press.

The Lady Rams managed to keep up with the Lady Scots, exchanging baskets, before the it broke loose.

The Lady Scots put up back-to-back shots and was answered back by a jumper from junior guard Baylyn Villafana, 4 – 2.

However, it seemed the Lady Rams could not get anything going into the basket, as the Lady Scots began to run away with the game.

Junior's forward Laurynn Strate and guard Marla Manzano sank in a free throw each, and Villafana put up a shot before the end of the quarter, however, the Lady Rams still trailed, 19 – 6.

The second quarter was not a good one for the Lady Rams who were held scoreless. It was a much slower quarter, but the Lady Scots added to their lead before halftime, 39 – 6.

White shared a few words for Barclay, who he describes as "a strong competitor, and times her worst enemy," followed by Barclay who thanked her teammates, coaches, including coach Justine Smiley who was in attendance, mother and everyone in attendance.

On his lone senior, White said, "She's going to be an incredible asset to whatever community she ends up in. She wants to go into law enforcement so I respect that tremendously as a person who tries to serve their community, somebody that is willing to put their life on the line for us everyday, takes a special person and you can see it in the way Delaney carries herself when she plays. She is confident but not cocky, hustles like nobody's business and is her own worst enemy at times just because she's so hard on herself. She wants to be a perfectionist and that's what truly drives greatness so Delaney has great things in store in the future."

To begin the third quarter, Manzano found Barclay down low for a layup, 39 – 8, but was quickly answered back.

Barclay then sank in a free throw and another layup, and Manzano joined in with a layup of her own, but the Lady Scots continued to answer on the other end of the court.

The Lady Rams were held scoreless again in the fourth, and the Lady Scots only scored three times.

"As a rookie basketball coach, I felt like there's a lot of room for growth for me as a coach. Not just coaching the girls, but basketball," he said. "I'm excited to dive into it a little more in the offseason and try to play more to our girls strength next year."