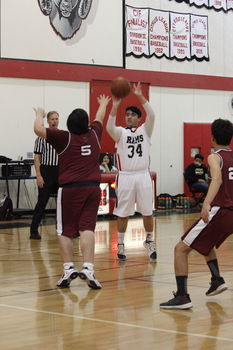 It was a comeback waiting to hap-pen, but being held to five points in the first half trumped the Borrego Springs boys JV basketball team's fourth quarter efforts.

"I think if we hadn't spotted them 20 points to start the game, we might have been ahead by 40 at the end. For a bunch of freshmen and sophomores, and one junior to step on the court against a varsity team, who didn't have enough students at their school yet for a JV and varsity, I'm super proud of the way we hung in there and started to run the offense," head coach Tim White said. "We switched things up and went man, started pressuring which is new to them, so I used those time-outs to go over exactly what they are supposed to be doing."

It was a slow first quarter, as both teams struggled to put up shots. However, the RoadRunners man-aged to get on the board first with 5 minutes on the clock, 2 – 0. Midway through the quarter, they led, 4 – 0, until they were answered back with a layup by freshman forward Dylan Rodriguez, assisted by freshman forward Julio Medina.

The second quarter was similar to the first, as the RoadRunners began to take control of the game, running away with the lead.

The Rams did not have a chance to score until the last 13 seconds of the quarter, after a three-pointer by junior guard Miguel Garcia, 16 – 5.

To begin the third quarter, Medina put up a shot under the basket, 16 – 7. The RoadRunners continued to score to extend their lead.

Miguel Garcia and freshman guard Angel Vilchis put up shots, however, the Rams were still down, 24 – 11.

The fourth quarter seemed like a whole different game, as the Rams were clicking much better as a unit, but it did not begin that way. Consecutive turnovers for the Rams began the fourth, but luckily the RoadRunners could not convert them into baskets.

With 6:16 on the clock, and the RoadRunners ahead, 28 12, the Rams began their attempted come-back.

Back-to-back shots behind the arc by Vilchis and sophomore center Moses Garcia then a free throw by Miguel Garcia, put the Rams within 10.

Their run was stopped by a jumper, and the Rams yet again put in a three-pointer thanks to Medina, 30 – 21.

The Rams continued to chip away, slowly, but surely, but it was not enough, as the RoadRunners large lead in the first half was too much to overcome.

Despite what it said on the score-board throughout the season, White said he is proud of the team for all the work they have put in. They started getting it at the end, closed that gap, and their efforts is some-thing to be proud of.

"For JV, the win-loss record isn't as important and not how you judge the program. It's about how far they players have come in terms of being a player and a person," White said. "I think all of them have had tremendous growth this year, so I'm excited about the JV team next year and the ones moving up to varsity."