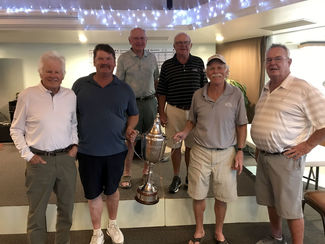 As was the case last year, three local men's club teams vying for bragging rights this year – Rams Hill, de Anza, and the Borrego Springs Resort – each won the day on their home course* in pursuit of the coveted Borrego Cup.

This year it was the Men's Club at the de Anza Desert Club that topped the three-day event scoring, with the tourney held Feb. 5, 6, and 7 – just another three beautiful days for golf in Borrego. Of some note, all three teams improved their overall score this year over last.

*Note: The course at Borrego Springs Resort has been closed for months, so the players trekked over to The Springs at Borrego Golf Course and RV Park for the last day of the tournament.

Playing in threesomes, one from each team in a Stableford format, points are awarded for total net strokes per hole (i.e., after handicap).

It's difficult to assign a specific reason, aside from total scoring, for the de Anza win, but steady improvement from Day-1 to Day-3 (395, 401, and 427 points, respectively) probably was a factor.

Rams Hill started out strong on their own Day-1 course with a 419, dropped 77 points on Day-2, and recovered on Day-3 with 420 points. BSR started Day-2 in last place but edged out Rams Hill going into Day-3, then had a 90-point improvement on the final day of play. A great surge, but it wasn't enough for the win.

In terms of individual scoring, BSR's Ray Carle posted the highest single-day point total on Day-3, a score of 45.

"It was amazing," he said, "I swung easy, and everything went great." Carl also held up his end on Day 1 and 2, being among the top scorers on the BSR team. The next two top scores for a single day also happened on Day-3, with de Anza's Rick Sprouse and Rams Hill's Ron McKown both scoring 43.

With the BSR golf course fallowed, it looks like the Springs at Borrego will be the third venue for the Borrego Cup next year, too.