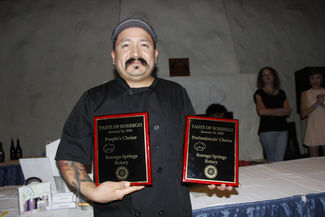 Eight local chefs and staffers from restaurants in Borrego Springs put their skills to the test and relied on the taste buds of those in attendance at the 9th Annual Taste of Borrego, an event sponsored by the Rotary Club, held at La Casa del Zorro Jan. 26.

It was, pure and simple, the place to be, filled with food, raffles, and auctions to raise funds for our Rotary Club, an organization that gives much needed financial support to many worthwhile groups and causes in Borrego Springs, and even in Mexico.

But how does one choose what one food is better than the other? Well, the judges – chefs and wine experts –were left with the tough decisions.

In yet another back-to-back year of a double win, the Professional's Choice and People's Choice Award went to Carlee's Place and Chef Chino Salazar for their sea scallops, which were "perfectly seared and served in lemon butter with capers" that made the difference, or their mini-Baja burger, or the Carlee's Slider, or perhaps Chef Salazar's combination of the above.

Manley helped Rams Hill win both of the awards at the Taste of Borrego in 2019.

On hand to greet the attendees was the stunning Miss Borrego Danielle Del Bono and her court First Princess and Miss Congeniality Delaney Barclay and second princess McKinley Parker, who also sold raffle tickets. How could one refuse an arm's length string of tickets, especially with them measuring? The tables quickly filled up, folks sipped wine courtesy of Borrego Outfitters and got themselves ready for a dining experience like no other.

On the menu was just about everything delicious a Borregan could ask for, emanating from the restaurants with many delicious entries, including the Propeller Restaraunt producing what had to be the most scrumptious date-based appetizer in the world that was gone from the trays in minutes, and the Triple Chocolate Mousse by Rams Hill's Chef Nick Martzolf to cap the evening.

The judges of the night were Chef Jim Phillips, voted Chef of the Year by the California Restaurant Association; David Sheline, wine specialist and Certified Sommelier working with American Wine Distributing; Erik Gosswiler is currently a chef with Sysco Foods and is a protégé of Wofgang Puck; and Randy Pidd, former Executive Chef at Kapalua in Maui and San Diego's Princess resort.

Called into auctioneer service once again was the fabulous Martha Deichler, a presence at the event and in the community like no other. Her funny ad libs and quick thinking kept both the raffle and auction moving apace; playing her "unmistakably the one in-charge" role ensured that auction prices climbed accordingly, and virtually all auction items exceeded minimum bids.

The wife of Harry Turner, Rams Hill COO and General Manager, apologized for a minor online purchase in his absence, but that probably was unnecessary when he informed her that they both would be away in June on a three-day fly-fishing trip to Idaho thanks to his winning bid of $2,000; bidding was so furious on Dave Duncan's Bike Borrego Electric Bike Tour that Martha called for a second round of bidding to include more riders; and a surprise item by Patrick Meehan, Sun publisher had folks searching under their chairs for one of four gift certificates to his new restaurant opening soon, Propeller Bar & Grill at the Airport.

Unfortunately, many thought the furniture tags under the seats were winners, only to be starkly reminded by wording on the tags of the federal offense being committed by removal. The feds have yet to be notified.

The total intake of funds for the night came to about $30,000 before expenses – dinner, raffle tickets, live auction – about half that from 165 dinners at $90 each. Then Deichler announced the goal of $13,000 from the live auction, which would have been $2,000 above last year. At the conclusion of the live auction, they were $2,000 short of the goal, so what to do about the shortfall?

A suggestion from Bruce Manildi in the audience to get 20 people to pledge $100 each made quick work of that. Hands quickly raised, and the goal was met yet again, thanks to the generosity of Borregans one and all.

It was yet another Taste of Borrego, and all are looking forward to another year of great food and company.