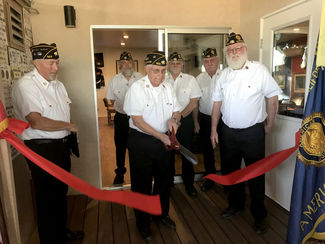 The ribbon cutting ceremony at American Legion Post #853 on Jan. 24 marked the completion of their new dining room and its direct connection to the kitchen and bar areas.

Pancake breakfast fundraisers, as but one example where all food is donated and staff time volunteered, have become a staple the Legion post, with many local organizations vying for those Sunday morning slots to help raise funds. The most recent event to raise funds for the boys and girls high school basketball program raised over $1,000, as did other fundraisers before it.

The Legion supports many worthwhile causes, as listed in the accompanying photo that hangs high on the wall inside the Bargain Barn. Where does the Legion get the money to sponsor pancake breakfast fundraisers and donate funds for local organizations?

Surprisingly, it turns out that at least 50% of the Legion's gross income, according to treasurer Bob Juers, derives from a single source: Sales at the Bargain Barn. It's mostly via word-of-mouth interest generated by those who have taken advantage of the discounted items, say the Bargain Barn's chief honchos Tim and Susan Kight.

Furniture, clothing, household electrical appliances, tools, sports equipment, and many other items big and small are all priced by Tim and Susan and then put out for sale. Those sales are conducted only two days per week, Friday and Saturday, between 9 a.m. and 2 p.m.

Full story in the Feb. 6 issue of the Borrego Sun.