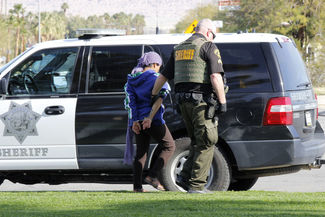 A local resident was assaulted outside of the Desert Pantry in The Mall on Jan. 30, resulting in an arrest at Christmas Circle.

At around 12:30 p.m., the suspect, only known as Juana, was seen shouting at The Mall, as well as vandalizing property put in by maintenance workers.

Juana was asked to leave the premises by Eva Rocha, an employee at The Desert Pantry. However, she refused and then became agitated, instigating a fight.

"I told her I did not want to fight her, but she kept yelling at me to put my hands up, but I wasn't going to do that," Rocha said.

According to witnesses, when Rocha turned around to go back inside of the store, Juana swung at her, hitting her in the face.

After a brief altercation, Juana left and headed toward the Circle.

The police were called and Sheriff Billy Painter arrived to the scene.

Painter took down the statements of Rocha and witnesses.

During this time, Juana was seen by witnesses crossing the street toward Wells Fargo, stopping traffic and yelling at people in their cars. She was then heard in the bathroom at the Circle, screaming, which seemingly frightened a few people, causing them to leave.

At around 1:30 p.m., Painter arrived at the Circle, attempting to get her out of the bathroom. After about 20 minutes, she finally came out and was handcuffed by Painter.

The incident is currently under investigation at this time, and it is unclear if charges will be pressed against the suspect by Rocha or The Mall for the vandalism.