Hal Hawkins: Art With A Story To Tell 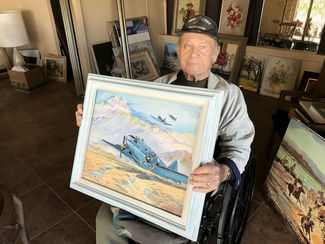 His paintings of airplanes now grace the walls of The Propeller, our newest restaurant soon to open at the airport. He also has a gallery in town, his 5th in Borrego, where he displays his artwork and has begun teaching.

Hal Hawkins has been working on his art for 87 years, first picking up a paintbrush at the age of 10 after a hip/leg displacement put him on crutches at the age of five and pretty much restricted his young physical life and lifestyle. It left Hal with plenty of free time in Kalamazoo, Michigan, time he used to draw, paint, and sculpt.

"I was always thinking of art," he said. He was declared "cured" of his affliction at the age of 13, but it's been with him in one form or another ever since.

Hal served in the Marines during World War II, accumulating 2,500 hours in a C-46 cargo transport pilot all around the eastern Pacific, including China; his service in 1943 included that of a courier of VIPs and official documents, operations that happened night and day over the course of his pilot duties and for which he had to be prepared to fly on a moment's notice. Later, he would serve as a pilot in the first helicopter squadron to see combat in Korea, but it was one experience Hal had in China that we'll summarize here.

In the accompanying photograph (to the right) of Hal holding one of his aircraft paintings, focus on the left propeller. During a routine flight on a mission to train a "flying sergeant" pilot from the enlisted ranks for dual engine certification, the left propeller on pilot and 1st Lieutenant Hal Hawkins' C-47 went haywire; it actually reversed pitch, resulting in his left propeller pulling and the right propeller pushing the aircraft into a downward, counterclockwise spin.

With little to no control over the aircraft, Hal and his three-man crew were in desperate straits, so he ordered two crew members to their parachutes, and they bailed out. Miraculously, Hal was able to gain control of the plane before crashing, 15 miles from the airport, but only after the left engine finally froze up completely, stabilizing its propeller and both wings, and he landed in the soft, muddy salt flats along the shoreline of what was then Shan Tung (now Shandong) Province, a peninsula in east China on the Yellow Sea; it was also the home of China's first emperor over 2,200 years ago.

Flaring wings and putting down the landing gear, the tail barely scraped the mud/salt flats, and Lt. Hawkins guided the plane to a safe stop. He said with a laugh, "It was the smoothest landing I ever made!" The relief of a safe landing, however, was soon replaced by the sounds of bullets hitting the plane by insurgent Chinese Communist soldiers. They had already captured the two crew members who parachuted out, and Hal and his co-pilot quickly became the next in line for POW status.

In the region, flying what is known as a "cap" mission, were two F4U Corsairs, also shown in Hal's painting. The pilot of one of the Corsairs was John Glenn, later the first American astronaut to orbit the Earth and who became a U.S. Senator. Hawkins and Glenn would become close friends in the post-war years.

Hal's situation was transmitted to the military commanders in the area, and photo reconnaissance captured the scene on the ground. But by then, he and his crew had been quickly forced into a wheeled cart and whisked away to the west on a three-day trek into mainland China.

For the next 92 days, Hal and his crew spent their time in a remote Chinese village not divulging anything but name, rank, and serial number to their captors. When asked to "fill in the blanks" to questions on papers handed them, Lt. Hawkins and the others always wrote the same phrase: "I don't know."

They were not tortured or mistreated, and they were provided the same food as the locals, but the soldiers kept pestering the crew for more info, at times referring to specific names of men back at their base, along with details of its layout and even some operational details. "There were spies everywhere," Hal noted.

Meanwhile, negotiations were ongoing for their release, and it finally came after the U.S. authorities provided food stuffs to the insurgents. Hal says with a little uncertainty there may also have been gold bullion involved.

In any event, he and his crew were released and got back to their duties. But Hal took on another duty he deemed critical after his release as a POW: On stopovers during official missions around the Pacific theatre of operations, he provided briefings to pilots and other military officials on what he learned from his captivity and how they should respond to similar situations. He remains very proud of that work.

Smith's artwork is in its initial stage of conceptual design, so we'll get back to Hal for his constructive critique of style and artist potential once it's finished.

Meanwhile, the next time you visit The Propeller, take a few moments to appreciate Hal Hawkins' paintings on the walls, around a hundred thus far, with more to come via commission by owner and Sun publisher Patrick Meehan.

What you will see at The Propeller is Hal's personal history of aviation rendered on canvas, and every one of them tells a story.

P.S. Hawkins has started to paint a new mural at the restaurant.