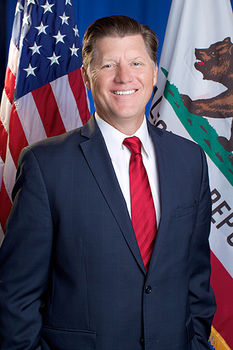 On Saturday Feb. 1, the Library hosted a local non-profit expo and a Town Hall with State Senator of the 38th District Brian Jones.

Each organization had representatives that were eager to share information about what they do and how it impacts the local community. Their booths lined the back wall and corners of the Library Community Room, while posters of the senator were hung in the front by the podium.

The non-profit groups that attended were the Soroptimist International of Borrego Springs, the Borrego Springs Dark Sky Coalition, American Legion Post #853, and the Anza-Borrego Foundation. The room filled with people quickly, as attendees mingled from booth-to-booth. Jones took this as an opportunity to introduce himself to local residents and speak with the organizations.

Jones greeted the audience with alacrity and offered this statement to get things started, "Even with all the partisanship and disagreement going on in Sacramento, as a republican in the minority party, last year I was able to get eight bills through both houses, the senate and the assembly, eight bills to the governor's desk. He signed seven of them and vetoed one of them. The one he vetoed, we're reworking this year. So your senator was able to get seven bills signed into law last year and they're all constituent important bills."

He also offered his resources, letting residents know that, "If you're struggling with a state agency, that is why my staff is here, if you're having trouble getting through and getting the help that you need with those agencies, that's what our office is for." Jones also introduced Aaron Andrews, his North County office coordinator.

Below are some of the concerns and questions from Borregans and the answers the senator gave.

Samples of some Q&A with Local Residents

Question: What have you done about the gas tax?

Jones: "The gas tax right now is unfortunately for the rest of the state, I just can't convince LA and Bay area voters to vote right on taxes. That's really one of the most disappointing things of Sacramento right now, the gas tax and the overall appetite of the governor and majority party up there that are running things on taxes. So right now there hasn't been a lot of conversation about it. I'm going to continue to fight these things up there, but when we as voters have the opportunity to turn these things down, we need to do the very best that we can to turn them down. The other thing we can do in California is open more refineries and make more gasoline and that would drive the cost of it down too."

Dave Duncan, a board member on the Water District and the Borrego Village Association, noted that the BVA was looking to find ways to "promote sustainable tourism in town," and that one thing that has come up often is that "you can drive from San Diego to Borrego Springs and never see a road sign that indicates you're on the way or how many miles away it is." He asked if the senator would facilitate a meeting with the appropriate party; the senator said he would look into the matter.

Question: Can you speak about Measure A?

Jones: "Here's my philosophy on this: You elect local representatives to go make decisions on the boards that you elect them to. And that at the local level, you're electing a council to make zoning laws and rules, what developments are going to be allowed. Measure A upends all that and basically it's ballot box zoning, meaning that somebody in Imperial Beach can now vote on a project that's being built out here in Borrego Springs. And vice versa, you'll vote on stuff here that's being built in Imperial Beach. Even as your state senator, I wouldn't come out here and tell you what looks good in your community and what doesn't look good in your community, and that's up to you.

So Measure A undoes that local authority. And as much as possible I'm a local authority type person and I try to let the locals make as much decisions as they can. I was like that when I was on the Santee city council, and now that I've been in Sacramento for a number of years, because Sacramento is trying to make decisions for you – I always promote local control. Measure B is really taking away somebody's personal property rights to develop their property according to the county's development plan."

Question: From Kimmy, owner of the Montezuma Valley Market in Ranchita, "Is there a possibility to have some form of accountability and incentive for agencies? From us having the store for a year and a half, I can't tell you how difficult it is. Like you said, in order for people to get out of poverty they have to be able to provide a business of their own. It's nothing hard; it's just about being accountable for their work. I will be writing a letter to you detailing everything.

Question: A Borrego resident cites an electricity bill of over $1,000 during the summer season, and explains that the SDG&E's time of use policy hurts residents and business owners by spiking rates during critical hours when it is the hottest part of the day and air conditioners are needed.

Jones: "I haven't heard a concern about electricity in a while, so I'm glad you refreshed my memory on it. I'll call SDG&E this week."

Question: Several audience members commented on the fact that Borrego only has one medical facility that is limited in terms of services. Some agreed that the facility was cost prohibitive and Borrego needs a more sophisticated facility, as well as the fact that most major insurance providers don't cover this area or have exorbitant prices.

Jones: "The government should compel the hospitals and doctors to expand services out here but if there's something the government is doing to restrict them from coming out here we could work on that. I'll reach out to my colleagues on the boards I used to be on. I'll try to get some unofficial background and see what we can do officially as well. It won't be quick, or solved next week, but I can start the conversation."

Question: Cristi Taijeron on behalf of the Pirates of the Salton Sea, a group that raises awareness for the shrinking Salton Sea, said she "would like to see awareness go to the state and have them involved in this environmental crisis right in our backyard."

Jones: "The challenge right now is that it's a huge problem. There's hundreds of good ideas to fix the problem. There's a lot of arm wrestling in Sacramento, and the feds too, about which one of these many good ideas are we going to do? It's political, financial, it touches every type of human problem to solve, and I think we're going to get there. This is a long term fix as well. The good news is, there's a lot of conversation, the bad news is there's a lot of conversation."

Question: Judy Stewart of the Dream Club raised concern for dreamers in the area.

Jones: "There's a lot of protection in Sacramento for dreamers. I imagine that whatever the US Supreme Court does that negatively supports the dreamers, that California will respond to protect them, and that's just where the political interest is in California is right now."

At the end of the Q&A session, the message Jones wanted to transmit to the residents of Borrego Springs is this: "I want the residents of Borrego Springs to know that we're paying attention. It's frustrating when your elected officials don't come and pay attention to what's going on here. That's why we're here today, to give the residents the opportunity to interact and have a dialogue. We can get letters, and we can get emails, and we can get phone calls, that's one thing. But when the elected officials are here and actually interacting, that's a whole other level of commitment to the community."

Jones was elected in 2018 to serve the people of California's 38th Senate district. He is Chair of the Senate Republican Caucus. Prior to serving in the Senate, Jones was a Santee City Council Member for eight years from 2001 to 2010 then again from 2017 to 2018. Jones was the representative for the 71st Assembly District from 2010 to 2016. He grew up in the district and attended Santee Elementary, Cajon Park Middle School, and Santana High School. He continued his education at Grossmont College before earning a bachelor's degree in business administration at San Diego State University.