Borrego Does Broadway A Huge Success 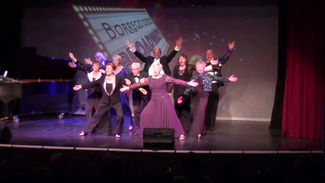 The BSPAC production of Borrego Does Broadway from Jan. 31 thru Feb. 2 was so good in so many ways that it's easy to give credit where credit is due: A cast on fire. They provided maximum entertainment with excellent staging and movement, variety, very few stage props save a piano, a backdrop projected on the screen, and narration between songs that reminded folks of the songs' origins on Broadway.

And of the 17 songs by 11 very talented local singer-actors, all were good, and then there were just some flat-out great renditions brought to life. It's tough to single out performances for special recognition, but here goes.

In Act 1, we were treated to three songs in a row that were, respectively, highly entertaining, thought-provoking and emotional, and hysterically funny. Gypsy's Bosom Buddies by Elaine Hazelrigg and Lynnette Salton brought humor and even a little bawdiness to the notion of friendship, perfectly staged and executed by two of Borrego's finest; Fiddler on the Roof's "Do You Love Me?" by Dick Helvig and Sherry Harapat was as sensitive and poignant as it gets on the meaning of long-term relationships, traditional as was the case here for two people who first met on the day they were married, but easily projected as well for modern ones.

Lynnette Salton's take on the highly emotional song Memory in the musical Cats, starting out in the traditional mode but quickly morphing into a very funny re-write of the lyrics attenuated to the everyday lives of Borregans – we can't remember even the simples things anymore.

The Ensemble cast's rendition of It's a Grand Night for Singing from State Fair closed out Act 1 with a bang. That was pure entertainment.

The highlight of Act 2 had to be the Reverend Son Pom Ye's soaring rendition of The Impossible Dream from Man of La Mancha. His vocal range and purity of tone sang directly to our better angels, inspiring all in attendance to not be limited in one's quest for noble objectives and lofty goals.

With piano accompaniment by Dick Helvig (when he wasn't performing) and Jinny Perrine, all of the songs told part of a story first brought to the American stage in the form of Broadway productions in the 20th Century, and in the telling of those stories the entire cast brought them to life once again for Borregans of a certain age.

One of the great things about this production was that while sometimes we forget where we put our car keys, we sure remembered these classic songs. Thanks to our fine actors here in Borrego, the songs brought us joy. What more can one ask.