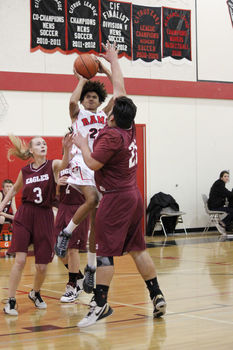 Junior forward Cam'mron Jambor works his way through the paint for a jump shot.

As they headed into halftime with a double-digit lead, the Borrego Springs boys basketball continued their momentum throughout the game to defeat crosstown rivals the Julian Eagles.

The 48 – 24 win was a nice bounce back from their overtime loss just a few days earlier against Warner Springs, evening out their record to 1 – 1 in Manzanita League play.

"It feels like we actually had a chance to open up our offense. They were playing a lot looser and were more focused than they have been," head coach Mauricio Polanco said. "It also helps that everyone was a little healthier, so that's a plus. But it seems that everything was clicking and it worked in our favor."

The Rams simply could not box out and get the rebound against the Warner Springs Wildcats, and dropped the game in overtime, 49 – 41.

"We just could not box them out and keep them off the glass. We got out rebounded by a much smaller team and it cost us the game," Polanco said.

The team also faced Vincent Memorial in another league game, which took place after print.

In the first quarter of the game against the Eagles, the Rams were on the board first with a layup by senior guard and forward Ty White, but were quickly answered back to tie it up 2 – 2.

The Eagles only managed to get three more points after that, as the Rams took control of the first quarter.

Senior forward Andres put up a floater, and White followed with a steal for a layup.

With 3:18 left on the first, sophomore power forward Daniel Arias put up a shot behind the arc, after a pass by junior forward Cam'mron Jambor who saved the Rams' possession.

In the second, both teams could not get to the basket as often, as each were held to just seven and five points, respectively, with the Rams on the leading end.

White was selected as MaxPreps' Player of the Game.

The Rams started the second quarter right where they left off with back-to-back shots, as they led, 18 – 5.

With 5:36 left in the second, the Eagles forced an and-one play, and another layup, but were still down.

To begin the third quarter, Jambor hit another three-pointer, but was answered back on the other end of the court with a layup by the Eagles.

It was back-and-forth but the Rams stayed in the lead, going into the fourth up 28 – 16.

The Rams put up back-to-back shots to begin the fourth to extend their lead, 32 – 16.

A layup under the basket by the Eagles stopped their momentum just a bit, but were answered right back by the Rams.

Midway through the fourth, both teams continued to exchange baskets back-and-forth.

Jambor and junior center Juan Medina both hit shots from behind the arc, adding to the Rams lead.

The Eagles tried to keep up, but could not overcome the deficit.

Even with the win, Polanco said the Rams still have a few things he'd like to see his team do, one being keeping their momentum from this game, but also keeping their heads on straight.

"We need to continuously work on rebounding, and hopefully we can keep playing that we did. Start loose, fast, quick, stay aggressive and still have fun doing so," Polanco said. "I'm confident we can finish with a winning record."

They will return home against to face West Shores Jan. 28. Time to be announced.