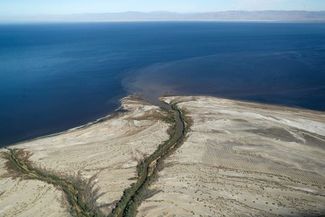 On Jan. 10, Governor Gavin Newsom has unveiled California's $222 billion spending plan for fiscal year 2020 – 21. Included in the plan is the proposal for investment in the Salton Sea and New River. In the budget, there is $220 million to support the Salton Sea management program, a 10-year plan to reduce the environmental and public health hazards plaguing the communities around the Salton Sea.

The state's total commitment has increased to $891 million for the length of the program.

In October, the Imperial County declared a local state of emergency at the Sea.

$28 million has been allocated for the New River improvement project to begin with a cleanup in Calexico. This will feature a pipe that will use waste water discharged from Calexico's treatment plants to restore flow in the original river channel through the city and into the Salton Sea. A trash screen will be installed just north of the border.

Assemblyman Eduardo Garcia said in a statement, "This new budget marks unprecedented investments and momentous headway for the Salton Sea, New River, and climate resiliency. Importantly, this budget reflects that our concerted advocacy efforts over the years are being recognized by this Administration."

Governor Newsom is expected to reveal his final budget in May, then the State Legislature will need to approve the budget by June 15.