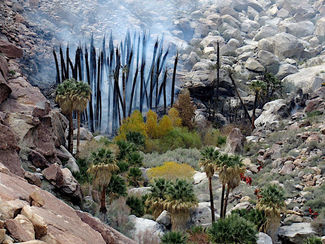 A grove of palm trees, a popular sight to see while on the Palm Canyon Trailhead, were set on fire Jan. 18, but the cause is still unknown.

According to Mark Jorgensen, who visited First Grove the day after the last burn (which he believes was approximately 1970 – and another man-caused fire).

Shortly after 12:20 p.m., the Borrego Springs Fire Protection District responded to a call from a Boy Scout group.

At around 1 p.m., the fire reached half an acre with a slow rate of spread, according to Cal Fire. Hand crews continued to fight the fire, with the sheriff's helicopter dumping more water loads from the de Anza Country Club pond.

The Anza-Borrego Desert Research Center said the trees should regenerate within weeks if not cut down.

"From looking at photographs, approximately 80% of the Grove burned, leaving 15 or so trees at the east end of the Grove (closest to the campground) that did not burn. The big loss, in terms of the ecology of the area, is wildlife habitat," UCI Steele Burnand Anza-Borrego Desert Research Center Reserve Manager Jim Dice, said.

Crews remained at the scene overnight to mop-up.

On a Facebook post documented by Jonah Saesan, a Director, in town for the annual Film Festival, said a Boy Scout troop yelled fire, seeing flames going into the air. Saesan said those near the area managed to get to a safe distance.

There were no reports of injuries or structural damages.

The trail will remain closed this week, but the Palm Canyon Campground is open, according to a statement put out by the Anza-Borrego State Park. The Park Staff will re-evaluate midweek to see if conditions are suitable for visitors to access the trail.

The Borrego Palm Canyon Trailhead is one of the most popular hiking areas in the Park.

"It is tragic that one of the iconic sights for visitors to the Park will look like giant charred matchsticks this spring, during the time of peak visitation. But the grove will come back," Dice said.

"In anywhere from two weeks to three months we should start seeing new green leaves emanating from the crowns of the charred palms," Dice said. "The fire will open up the grove and the sunlight and nutrient rich ash will provide a fertile seedbed for young seedlings. Studies indicate that the burned trees will produce more flowering stalks and fruits than unburned trees."

Owls, orioles, yellow bats, ravens and roadrunners among other animals use the skirts of dead palm leaves on the trunks for nesting, roosts and shelter. It will be a long time before there is a similar amount of palm skirts in First Grove.