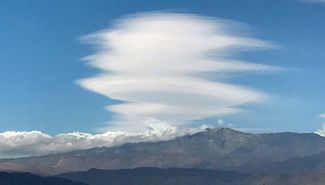 A stack of lenticular clouds over the Santa Rosa Mountains, seen from Borrego Springs.

This is an excerpt from "A Natural History of the Anza-Borrego Region, Then & Now," by Mike Wells and Marie Simovich, Sunbelt Press

Lenticular clouds are frequently seen over desert mountain ranges. They are lens-shaped and differ from other clouds in that they are stationary. They are formed when a moving stream of air is deflected upwards by a change in topography, such as a mountain range. As the air rises, it cools. When its temperature reaches the dew point, its moisture condenses and forms a cloud. The cloud will remain in place even as the air holding the moisture continues to move because that is the elevation at which the air stream reaches the dew point. Because of the movement of the air stream, the cloud will take on a lens or saucer shape.

Often the stream of air will rebound from the tropopause (boundary between the troposphere and stratosphere) back to earth's surface, and then rebound again. This can happen several times, creating a string or train of lenticular clouds. If the air continues to rise after the original condensation it will have less moisture, and consequently a new, lower dew point. As it rises it can reach this dew point at a higher, cooler elevation, forming another cloud. This can happen several times, creating a stack of lenticular clouds.