In Trouble vs. In Compliance: The Salton Sea and Borrego Valley 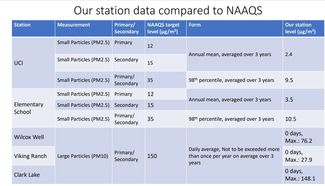 In two separate presentations on air quality at UCI's Steele-Burnand Research Center, scientists from the Department of Earth System Science at UC Irvine made clear not only the air quality trouble the Salton Sea is in now, and probably more so in future years, but also how Borrego Valley is well below EPA target levels for particulate matter.

These studies were made possible by grants from the Borrego Valley Endowment Fund, and there are about 15 air quality monitoring stations around the Salton Sea and in Borrego Valley providing data to the researchers.

Dr. Charles Zender studies dust in the Salton Sea region. The Salton Sea's steady evaporation over time exposes what is called the "playa," much like a seashore around the Salton Sea. It's an area of exposed sediment that expands as the Sea shrinks due to evaporation (see Graphic 1).

Because the Salton Sea is so shallow, the loss of less than 30 feet in depth in the next 10 years will, according to Dr. Zender, result in about a 40% increase in playa exposure. It also shows that the Salton Sea's southwestern section of exposed playa is a prime source of wind-generated dust emissions, mainly in the form of particulates. And those very small (micron-level) particulates are made up of agricultural runoff residue – pesticides, herbicides, and other chemical compounds – known to be dangerous to public health.

When the wind picks them up and transports them to populated areas, some are small enough to be trapped in the lungs, and even smaller sizes can enter the blood stream. Children's health is most at risk.

It's a case of cascading consequences, originally created by the drop in water elevation that causes lots of other problems. Graphic 2 illustrates the once gradual but now accelerating decline of the Salton Sea water level.

Surface levels fluctuated slightly between 1998 – 2000, but then began an ever-increasing downward acceleration that will only bottom out when the lake is completely empty. So in addition to particulate-laden windblown dust emissions off the playa, negative physical and biological effects also come into play as the Salton Sea evaporates and surface levels decline.

In Graphic 3, the Salton Sea is currently in the "Rapid Change" phase, where the first fish losses will begin in just a few years as the surface water level drops while at the same time salinity rises. The year 2030 will be the beginning of the loss of water boatman, then brine fly reproduction, and sometime before 2040 the loss of brine shrimp reproduction. These species are low on the food chain and critically important to the balance of the entire Salton Sea ecosystem.

That's the bad news about dust. The good news about dust comes from Dr. Morgan Gorris and her team, also from UCI, currently in Year-3 of a 4-year air quality study in Borrego Valley, again funded by the BVEF. Dr. Gorris successfully defended her PhD thesis and was awarded her doctorate in August. Gorris showed the issues involved with particulate matter (PM) via a comparison between the size of a grain of sand (90 microns); a human hair (60 microns); dust and pollen (10 microns, aka PM-10); and combustion particles, organic compounds, metals (2.5 microns, aka PM-2.5).

Full article in the Jan. 23 issue of the Borrego Sun.