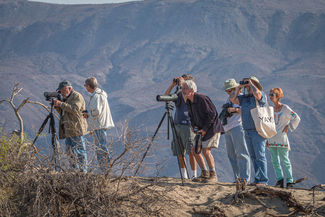 The annual Borrego Valley Hawkwatch is about to take flight, and leaders of the event are looking for volunteers to assist with monitoring the migration of Swainson's Hawks as they pass through Borrego Springs.

Organizer Hal Cohen has already completed one training class and is planning another to educate those who will be participating in the count.

Hawkwatch began 18 years ago when it was recognized that Borrego Springs was on the migratory route of for these beautiful hawks that pass through here every spring on their long journey from southern South America to as far north as the Arctic Circle.

Cohen said the official count will begin in late February and continues daily through March.

Counters are in the field every morning to record the number of birds cited as they launch from their overnight roosting locations.

This can be a spectacular sight as the birds ride uplifting thermals, using as little energy as possible, then gathering in a circular pattern known as a kettle as they rise looking for wind currents that will allow them to continue their northerly migration.

The data collected by the citizen-science volunteers has compiled valuable information about the migrating hawks and how numbers are affected by weather, available food and habitat conditions.

The 2019 count officially recorded only 1,086 birds, which was the lowest number in the history of Hawkwatch. But there is more to the story.

After another good rainfall season and last springs wildflower bloom, hopes were high for a record number of migrating birds. A good wildflower year generally means a bumper crop of vegetation, followed by the huge caterpillars that the hawks love to eat.

That happened during the Superbloom of 2017 when 11,690 Swainson's were recorded during the count period. There were high hopes for even more in 2019. But it didn't happen. While there was a good flower show and caterpillar crop, apparently migrating Swainson's didn't get the memo that they needed to show up during the official count period.

"What was promised to be a repeat in 2019 didn't happen. Well it didn't happen on schedule," Cohen said at the conclusion of last year's census.

It was only after the count officially ended that large numbers of hawks began arriving in Borrego Valley, with several hundred spotted on April 4.

In the brief time between April 4 and 17 an additional 8,000 Swainson's were observed but were not included in the "official" count.

Timing of the 2019 wildflower display and the availability of millions of white-lined Sphinx Moth caterpillars throughout Southern California and Mexico apparently slowed the progress of migrating birds. They were simply too busy enjoying the feast.

Early and heavy rains have already turned the desert green this year. Hopefully additional rains will arrive in a timely way to produce not only a beautiful wildflower show, but abundant food for migrating hawks.

Volunteers will be out every morning from around 8 a.m. to 11 a.m., but some are also out in the evenings to note where arriving birds are roosting. This information will help morning observers better locate birds launching the next morning.

The Hawkwatch site is located 2.8 miles north of Palm Canyon Drive on DiGiorigio Road and guests are welcome.

Photos of Swainson's hawks and information on past counts, along with daily count reports, can be found at Borregohawkwatch.blogspot.com and other North American watches at Hawkcount.org.