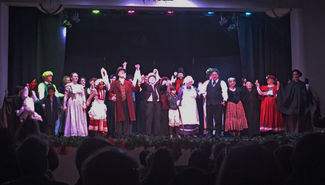 The Julian Theater Company provided with community with another beautifully executed theater production. Just in time for the holiday season, JTC in association with the Julian Union High School District and the Spencer Valley School District, presented Charles Dickens' classic, A Christmas Carol.

The screenplay was adapted by Julian's own best-selling novelist, Don Winslow and the cast was made up of community members of all ages.

The Little Theater at the Julian High School is a great venue and lends a lot of history with its small space and restored wooden seats. The audience was transported to the era of the play through the use of projection for the background scenery. This simple use of technology no doubt saves the production team a lot of time and work.

Julian Theater Company is the brainchild of Scott and Debra Kinney. Their long history with Julian and theater is a great gift to the community. They have been providing the small town with theater productions that rival those found in larger, metropolitan cities for many years. Be sure to not miss their next production by visiting juliantheatercompany.com.