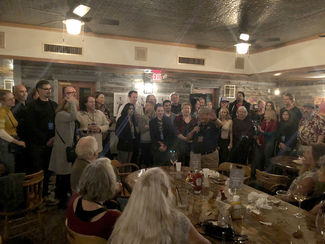 With 500 films submitted, the 75 best were screened at the Library and the Performing Arts Center, with numerous panel discussions included. As predicted by both the quick sell-out of All Festival Passes and subsequent standing room only attendance at most of the blocks of film screenings and panels, together with real-time audience reactions, it was a great success for the Seventh Annual Borrego Springs Film Festival, held from Jan. 16 to Monday Jan. 20.

The selection of category winners must have been difficult, given the high quality of films screened. Here are the judges' decisions on winning films and their directors: Narrative Shorts: Wind Phone, Kristen Gerweck; Animation: Selfish, Po Chien Chen; Documentary: Miracle in the Desert: The Rise and Fall of the Salton Sea, Greg Bassenian; and Latino/Hispanic: Marisol, Zoe Salicrup Junco; Feature Film: The Maestro, Adam Cushman & David Philips.

This brief summary reflects a perspective on four of the films, including interviews with three of the directors. These are not winners in their category.

In the dog-eat-dog world of filmmaking, where so many films and their directors and writers and actors and producers compete for attention, quality has a way of rising to the top, at least in terms of audience appreciation. A truly compelling dramatic documentary that speaks calmly to one's very soul; a fall-down-laughing comedy only 13 minutes long that gives one the opportunity to exercise that perhaps dormant humor gene; a feature film five years in the making where the concepts of loneliness versus being alone are explored successfully in both dramatic and comedic fashion; and a suspenseful tale of a girl stricken with selective mutism due to a traumatic childhood experience, where her motivation for not speaking is matched by her motivation for uttering one simple word.

The Borrego Sun and Festival Chairman Fred Jee would appreciate comments from film goers on the selection of winners and the overall experience. If so moved, send us a note at editorialsun@gmail.com.

Winners by genre, title and director(s):

Judge's Choice: Miracle in the Desert: The Rise and Fall of the Salton Sea, Greg Bassenian

Full article in the Jan. 23 issue of the Borrego Sun.