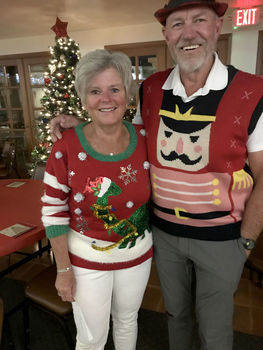 In this community, seniors get a lot of support, and deservedly so. One such opportunity for Borregans to show their generosity was the annual fundraiser at the RoadRunner clubhouse, held on Saturday, Dec. 14, and organized by the same couple doing it year after year, Ginny and Kerry Dennehy. A superb turnout of about 130 people led to a total of $6,712 in contributions for our local Senior Center. "It was a booming success!" said Ginny.

For starters, everyone must show up in the most awful sweater they own, later judged in the "Ugly Sweater Contest." Ginny and Kerry, shown in the accompanying photo at the beginning of the evening event, were not the winning couple. That distinction, if one can call it such, went to Ron and Eva Nue.

But they are not shown because either their sweaters were simply too awful to reveal to what would surely be a highly critical and unforgiving community having basic standards of visual assault, or else Ginny was too busy with important duties to take a photo. The latter is probably closer to fact.

Charlie Cutler won the "Heads or Tails" contest, a pay for play event, not because of his acumen in a legitimate test of skill, but rather because he was merely the last man standing, beating the 50/50 odds of a coin coming up heads or tails on any given toss, with players guessing unwisely unceremoniously booted off the island.

For entertainment, they all had the San Diego-based band "Exit" to listen and dance to, everyone having a great time, according to Ginny. "We all had a ton of fun, with great eats great drinks. It was so nice to see the community come together – the volunteers who helped cook the beef, make the salad, carve the beef, and tend the bar were the very the best."

Getting to the more serious purpose of the event, Dan Wright was on hand to promote the Senior Center. "Talk about a guy just like his dad who gives back to his community, that's our Dan Wright!" wrote Ginny.